On October 17, 2017, firefighters from San Lorenzo, Paraguay, rushed to rescue a homeless dog that fell down a 26 ft. deep well at a local animal shelter. 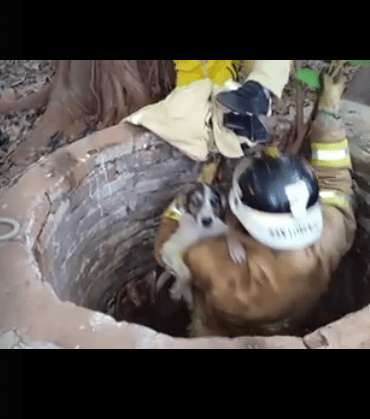 “Don Tito” as the dog is known, is one of the many dogs that live in the shelter and waits for a forever family, but this past Saturday the dog somehow climbed on top the uncovered well and fell into it.

Shelter volunteers heard the pet’s frantic cries and immediately called authorities. Firefighters were dispatched to the shelter and with the help of other animal rescue volunteers, a firefighter was lowered into the well to rescue the dog.

According to UltimaHora.com, Don Tito was bloody had an injured back leg, but thanks to the pool of water he landed in, his injuries were not more severe.

The dog was examined by a veterinarian and is expected to fully recover from the bruises and small cuts sustained.

We wish a speedy recovery for Don Tito and the opportunity to move to a forever home.