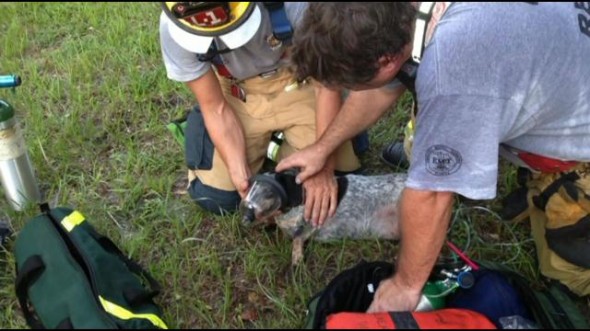 A family in Naples, Florida lost nearly everything in a devastating fire, but they have one big thing to be thankful for. Firefighters worked for almost thirty minutes to save their dog McCoy.

McCoy was not even breathing after being pulled from the fire by the City of Naples Fire Department. The dog had inhaled too much smoke. Firefighters didn’t give up, using an oxygen mask made specifically for animals the worked tirelessly to bring him back.

After spending ten minutes trying to revive McCoy the dog’s tail started to wag. The firefighters credit the mask with saving his life.

“Without the mask we could have used a normal re-breather mask, but this has a seal and you’ll see it, it has a rubber seal so the whole mouth and nose can go inside,” said a firefighter. “The dog can get 100 percent oxygen delivered to them.”

Neighbors who watched the scene were impressed with the firefighters’ dedication and began clapping when they saw McCoy come back to life.

“It was fantastic to see an animal resuscitate like that,” said neighbor Nicolette Billings. “It was amazing.”