On Monday, Scott Homon and his dog Ashley were hanging out at home in Tracy, California when a fire broke out.  They had made it out and were fine, but Ashley seemed confused and ran back in.  Firefighters managed to get her out, but she wasn’t responsive.  Using a specialized oxygen mask, they managed to revive her.

“When she was breathing well enough and opened her eyes and was responding, they went ahead and got me,” said Scott. 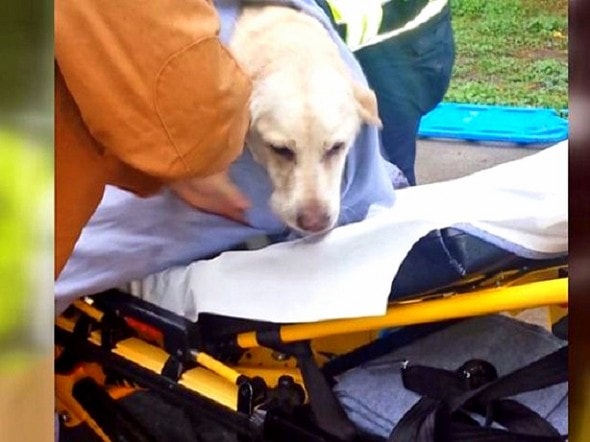 The duplex that Scott and Ashley lived in was a total loss.  In fact, both families lost just about everything.  But help was just around the corner.  Almost immediately after the fire was reported, the community came together, offering everything they could – furniture, food, clothing, temporary housing and other donations.  People were even willing to help out with Ashley’s doctor bills.

“What we’ve never seen or been able to actually view in real time is the emotion and compassion of the people in Tracy,” she said. “They just came together and said so many kind things that we don’t get to hear every day.”

The cause of the fire is still under investigation.  If you would like to find out more, you can click here to visit the Tracy Police Department’s Facebook page.  You can also get info on where and how to make a donation if you wish.