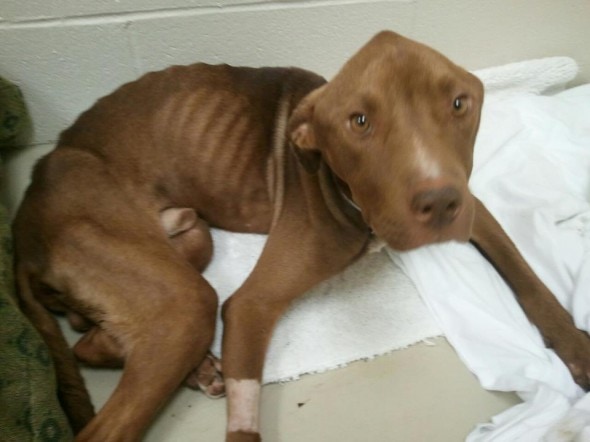 Alton Ledlow was going fishing Sunday morning when he spotted a dog on the bank. The dog caught his attention and Ledlow saw something in the water. Another dog was stuck in the creek and drowning. Ledlow jumped in and rescued the dog.

Ledlow arrived at Noisette Creek in North Charleston, South Carolina for a day of fishing. When  first saw the dog in the water he wasn’t sure what it was, he thought it might be an otter. When the dog raised his head he realized it was a dog in need of help. Ledlow jumped into the water and came to the dog’s aid. “I couldn’t see not doing it. He didn’t have any time, he only had a few seconds,” said Ludlow. “He was fighting like hell to stay alive.”

Ludlow found rocks in the dog’s harness that he quickly pulled out. He then brought the dog to shore with the other dog who laid down next to his rescued friend. Both dogs were very thin, the one rescued from the creek weighs only 20 pounds. Police brought them to the Charleston Animal Society where they are now being treated.