A 60-year-old man from  Sao Paulo, Brazil, is  praising firefighters as heroes. This after the men rescued the man’s five-month-old puppy from an underground pipe. The dog fell through an uncovered drain and became stuck.

On January 22, 2015, the Brazilian pet owner called authorities after discovering his small dog had gone missing and hearing dog cries from the uncovered drain.

When firefighters arrived at the home, the men followed the dog sounds and discovered the pet was trapped in the underground pipe. Rescuers weren’t sure how long the dog would survive in the water filled pipe, but they hoped to get him out just in time.

The men dug around the pipe until exposing it and then used an electric saw to cut the pipe open. 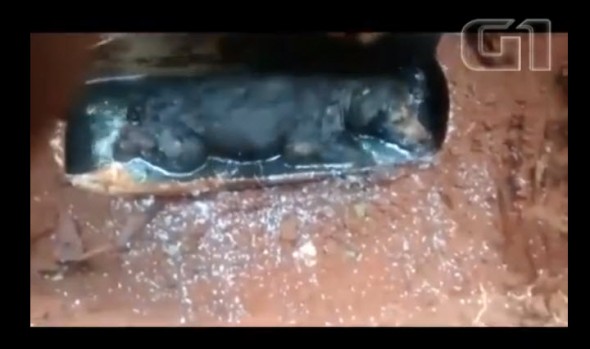 Somehow the puppy survived being swallowed by the drain, becoming stuck in the water filled pipe, and having an electric saw cutting around him.

When firefighters pulled the puppy out of the pipe, he was scared and dirty, but thankfully unharmed.

The dog was returned to his owner who immediately wrapped him in a blanket to warm him up. The puppy was later bathe.