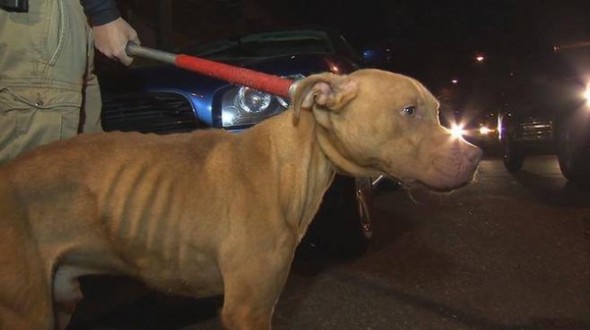 Five badly neglected dogs were saved from a home in Philadelphia on Friday. A sixth dog sadly did not make it as it died on the way to the animal hospital.

The rescue organization Justice Rescue received a tip that dogs in a South Philadelphia were living in deplorable conditions. The founding members of the rescue, who go by the nicknames Wolf and Crash, investigated the situation and were disgusted by what they found.

“There were five dogs in the basement, and it was awful,” said Wolf. “And there was a dog chained out back. The dog was emaciated, and was sitting in its own filth. It was terrible.”

They called the SPCA for help and while they waited the lady that had let them into the home informed the two rescuers that her grandson was on his way home with friends and he was threatening them.

Wolf and Crash called the police but refused to leave the dog that was out back and barely alive alone. Shortly thereafter the police and SPCA arrived to help. The SPCA took the dogs and transported them to get medical attention. Sadly, the dog that had been tied up out back passed away while being transported to the hospital.

The other five dogs did survive and are now getting the care they need. They are all expected to make a full recovery according to Linda Torelli of the Pennsylvania SPCA.

Miller Pitt and his girlfriend Karlin Johnson who owned the dogs have been charged with animal cruelty.

Although five dogs were saved, the rescuers have had a difficult time dealing with the loss of the one dog.

“I can’t stop thinking about the dog (that died,” said Wolf. “But I am happy we were able to save five dogs. Anytime you can do that, you’re happy.”