Okay, so we’re supposed to be all about dogs.  But dogs are so awesome, some animals want to be just like them, and of course, we have to tell you all about it.  Amber Carlton‘s cat is so much like a dog it’s scary…

My cat Smudge’s history is a mystery. I only know what little information his former owners wrote on his surrender paperwork. Even though they checked both “okay with cats” and “okay with dogs,” I have no idea whether he actually lived with another cat before he was surrendered. But there is no doubt in my mind that he was raised with dogs.

Because, well, I’m pretty sure he thinks he is a dog. 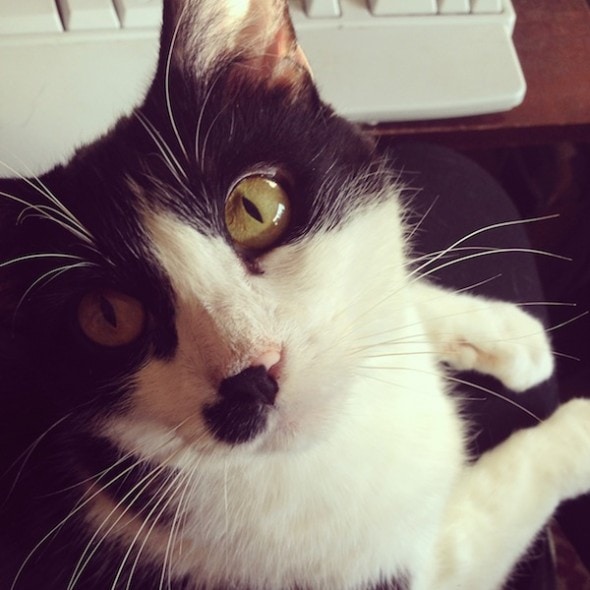 Why? From the moment he stepped paw into our house, he was totally at ease with our two dogs. Of course, we didn’t just throw him into the middle of the pack. We did introductions in a slow, controlled manner … sniffing through the door, cracking the door, letting them see each other through a baby gate. But we needn’t have worried. Despite being in a new place with dogs he’d never met before, he wasn’t the least bit worried about them.

Okay, sure, maybe it makes sense that a cat raised with dogs wouldn’t be afraid of them. But the weird part was that our dogs just immediately accepted him as one of their own. And even though they lived for years with our other cat Abby before Smudge showed up, they definitely don’t view all cats the same. Even though they’ve never so much as barked at Abby, they will eagerly chase a cat who dares to enter our yard. For a long time, we thought maybe they just saw indoor cats differently than outdoor cats. However, while visiting my sister recently, they blew that theory out of the water when they were a little TOO focused on her indoor cat. Yet when Smudge entered their lives, he somehow automatically became part of their pack.

I wonder sometimes if Smudge is some weird cat-dog hybrid, because with each passing day he seems to display more and more canine tendencies. Things like: 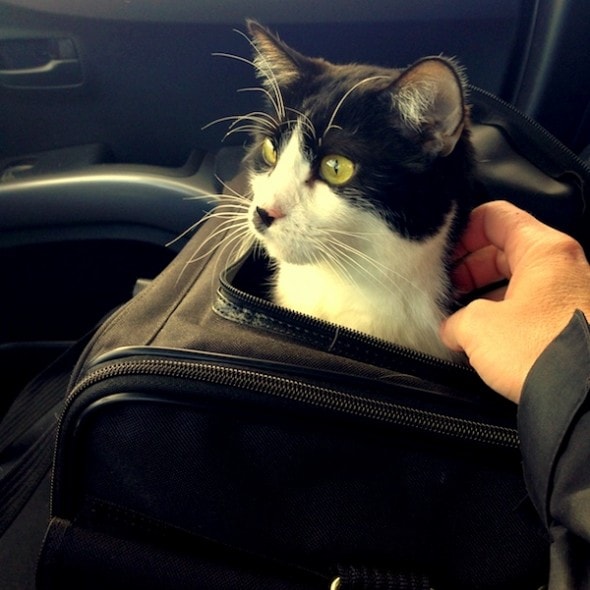 1.  He enjoys riding in the car

I had heard stories — some might call them legends — of cats who enjoy going for a spin. But I, like many a Bigfoot and Loch Ness skeptic before me, had never truly believed such a thing was possible. After all, I had no hard evidence. Sure, some people post pictures and videos of their car-loving cats, but those could be doctored, right? Then Smudge came into my life and all those preconceived “cats hate cars” notions went out the window. Smudge honestly loves a good car ride. I usually keep him zipped safely up in a carrier, but I’m pretty sure if I allowed him to, he’d stick his head out the window with his tongue flapping in the breeze like the cat-dog he is. 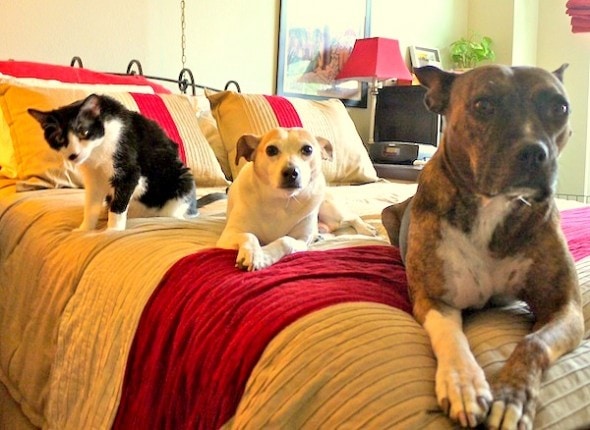 2.  He wants to be wherever the dogs are

Does Smudge spend time curled up near our other cat Abby? Does he follow her around? No. Because why would a cat-dog spend time with a cat when there are perfectly good dogs to hang out with? I often come home to Smudge sharing a sun puddle with Mayzie or lying on the bed with Ranger. If he’s not near one of the dogs, he’s contentedly asleep in one of their crates. And after dinner, he dutifully follows the dogs downstairs for their after-dinner potty break. I have never once let him just run outside with them but he remains ever optimistic. 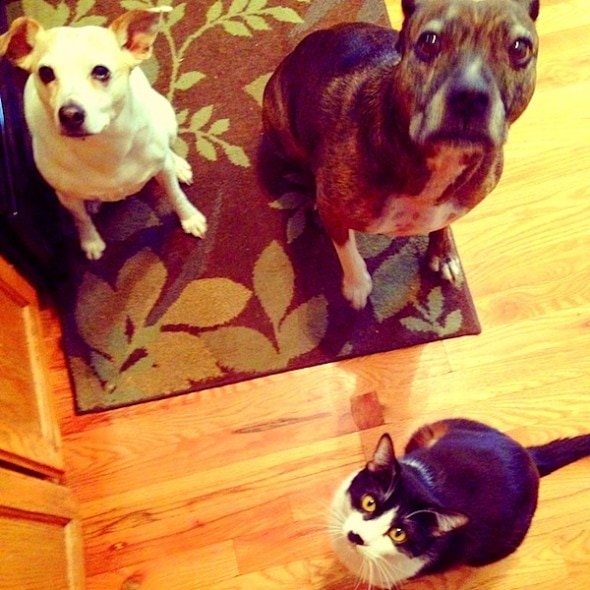 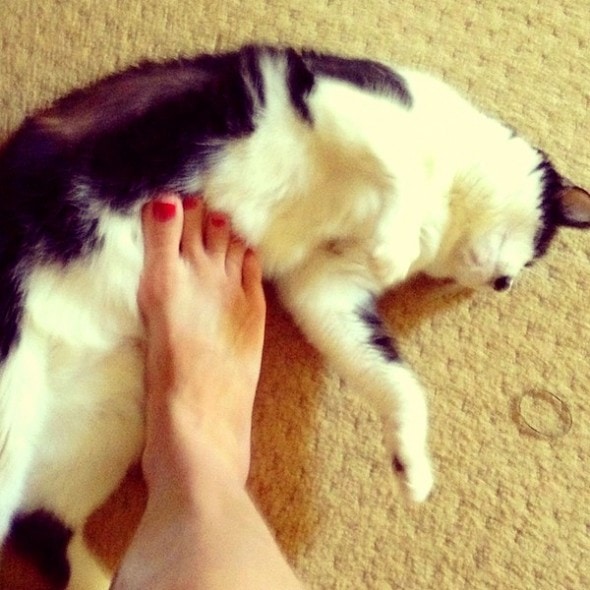 4.  He loves to have his belly rubbed

Okay, so I’ve had a couple of cats who liked to have their tummies rubbed … for about four seconds. Then the tail twitching starts, and you better stop or you’ll pull back a bloody stump. But having a cat-dog is great because he actually lives for long, drawn-out belly rub sessions. Doesn’t matter what I use. My hand, my foot, a broom, whatever. Smudge, like my dogs, will lie there for as long as I’m willing to keep it up. I’ve even blown raspberries into his tummy. Just try that with a non cat-dog. 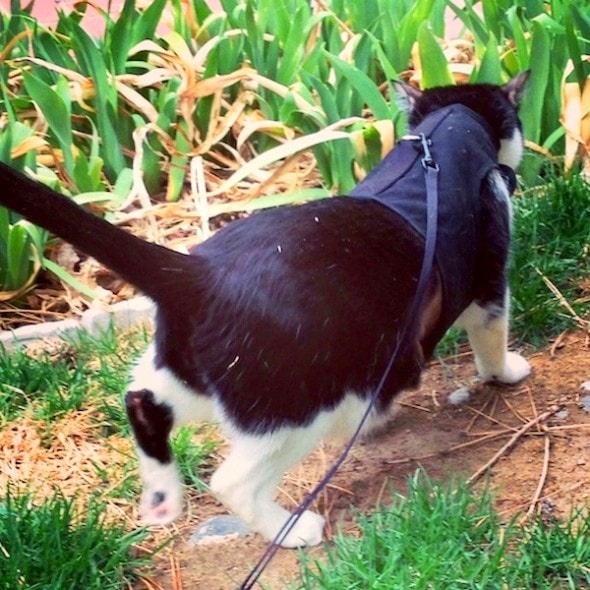 Because Smudge was declawed on all four paws by his former owners, the thought of him getting outside scares the crap out of me. But he yearns to go frolic with the dogs and sits by the back door crying when they’re outside without him. What to do? Well, first I bought him his very own cat tent, which he loved even though he couldn’t explore the yard. Then I thought, “Maybe he’d walk on a leash.” So I bought a harness and lo and behold, Smudge is in heaven! Yes, it took him a bit to get used to it, but now he gets to run with the big dogs, just like a cat-dog should.

Your turn: Have you ever had a cat-dog? Tell us about her in the comments.