A dog found burned and neglected last month recovers as his abuser – and former owner – is arrested for animal cruelty.

The shar Pei – Boxer mix was called Courage after he was taken to Miami Dade, FL Animal Services in July. He is now named Bentley and is improving in the care of Noah’s Arks Animal Rescue, of Oakatie, SC.

Noah’s Ark feels the burns may have been caused by the use of harsh and dangerous flea treatments. The burns were left untreated, the dog was clearly frightened and in distress when found, and he was discovered to be suffering from tetanus.

North Miami Police detectives said on Saturday that Witvil Florvil, 29, is charged with animal cruelty with intent to injure or kill. Another resident of the home was arrested earlier but was determined not to be the responsible party in the crime.

Noah’s Ark Rescue posted this at their Facebook page on July 26:
BENTLEY UPDATE….Sweet Bentley is slowly improving from all that he has been through. The burns on his back are the least of his worries at this moment. We have treated them and he is now very comfortable without taking pain meds for the discomfort. We now believe that he was burned when he had an allergic reaction to a flea and tick product that was put on his back as was described by the person that had him. He should have been taken immediately to a doctor once he realized what was happening. We do not know what product was used but will post as soon as we find out. The main medical issues we have been treating that are at the top of our list is the Tetanus. We discovered he got the Tetanus from an old dog bite on his leg. That area was flooded with the Tetanus serum. We have stopped the progression of the Tetanus in Bentley’s system with the injections. We are now having to treat him for the neurological symptoms he developed before we got him. He is being evaluated and closely monitored all the time to make sure he has received enough serum to get his normal neurological function back. The best news is that we are making progress. It is going to be about a month before we feel like Bentley will be back to normal. The rigidity in his body has lessoned over the last few days which we are glad to see. Each day that should improve. His tail has finally begun to relax and his eyes and facial expression are showing signs of improving. One of the big issues we are dealing with is eye sensitivity to any form of light. It causes him to be in lots of pain. We have been keeping big sunglasses on him which he seems to love and wants them on all the time. Unfortunately, they are not there for fun or a joke. They are there for medical reasons only. As his eyes go back to normal, then we will be able to remove them. 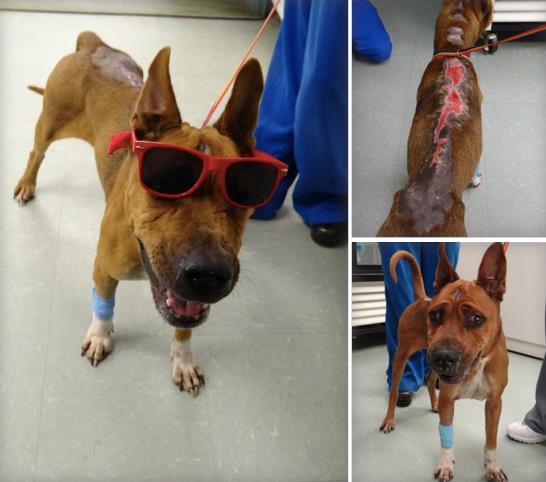 The rescue wrote at their website:
We rescued this sweet boy after being sent hundreds of pleas to step up and save him. We followed all of the links and felt certain another rescue would step up a lot closer than we are. He was picked up by Animal Control of Miami-Dade after someone called to report seeing a burned dog in their neighborhood. He was given pain meds, treated and evaluated while they were waiting for a rescue to step up for him. His days were soon going to be numbered if he was not rescued soon and no one had put a hold on him yet. We contacted rescues that we work with in the area and they made arrangements to get him for us. We immediately had him taken to the most wonderful vet, Dr. Matthew Cooper at Sky Lake Animal Hospital in Miami. He was treated there until we could pick him up. We immediately put a Vet Tech on the road to drive all through the night to pick our dear boy up the next morning and then drive him to us and an Emergency Care Hospital we use.