They have lost their homes, their independence, and in some cases, their loved ones. But in one Georgia town, people struggling with sadness have turned to a rescued canine for help. There is something about seeing Jovie arriving at Merryvale Assisted Living in Oxford, Ga. that brings World War II veteran Ross Bacon to his knees. He wants to get closer: seeing Jovie sparks an old memory. 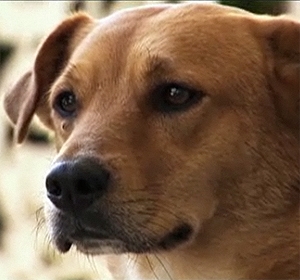 “I didn’t have any money, but I had dogs in Kentucky. Dogs don’t turn on you, do they,” said Bacon.

And this dog is special. Adam and Angie Cooper first spotted the Shepherd-mix rescue before Christmas on an adoption flyer at their vet’s office.

“And the picture just drew us in, and it was amazing how her eyes just sort of spoke to us. And we went and met her,” said Cooper. “The rest is, I guess, dog history, we adopted her just before Christmas.”

Since then, Jovie as been visiting Merryvale Assisted Living regularly, a job she seems to take great pleasure in.

“Her job is to come in and be loved on,” says Adam Cooper, Jovie’s owner. It’s a job well done according to residents: because she has been so effective at helping them to heal with the pain of loss, Jovie will sit in on all future grief support group meetings.

“You know they go through grief, because a lot of these are leaving home,” said Nancy Reynolds, activities director at Maryvale. “And so there is a grief to that, for a lot of them, and adjustment period. So I think they can use Jovie in that respect a lot.”