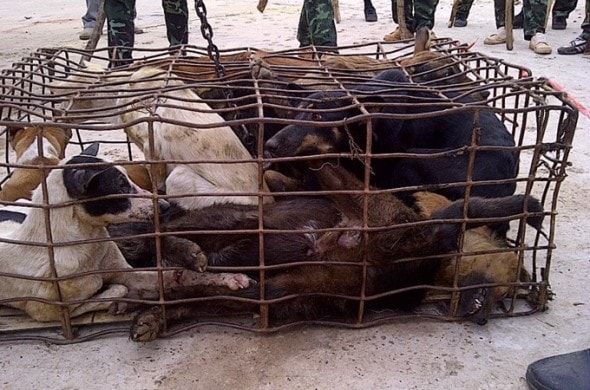 In the past week, Cambodia, Laos, Thailand and Vietnam have signed a deal with the intention of ending the importation and sale of dogs to be used as food. This move was initiated by their governments because of the involvement of animal welfare group Asia Canine Protection Alliance. The ACPA is comprised of four notable animal groups: Animals Asia, Change for Animals Foundation, Humane Society International and Soi Dog Foundation.

Dog meat is illegal in Thailand, but not in Vietnam, though the importation of dogs for consumption is. This doesn’t stop people from smuggling them in. Between 10,000 and 30,000 are brought in from abroad every month, according to an anonymous animal activist with Soi Dog.

Soi Dog is a Thailand-based nonprofit organization partnered with the US, the UK, Australia and the Netherlands that helps better the lives of stray dogs and cats in Asia, and educates people about animal care. They operate a network of undercover agents in Laos, Thailand and Vietnam who try to intercept smugglers at the borders.

The organizations are doing their parts to stop the illicit trade, and people from the groups do what they can to save individual dogs. UK resident and Soi Dog volunteer Rachel Barton has traveled to Thailand to save three dogs that would have otherwise been dinner.

“I was blown away by the charity and just could not believe the work that it was doing,” she said. “It is so forward thinking and they are just trying to raise awareness of the dog meat trade.”

Dogs are crammed into cages and packed in trucks for 2-3 day journeys with no food or water until they arrive.

“They’ll be force-fed with pipes shoved down their throats, since they are sold by body weight. Dogs will be burnt with blowtorches to get rid of their hair,” said Soi Dog founder John Dalley. “There is a belief that causing pain increases adrenaline which tenderizes the meat. So you have dogs that have their legs broken right before they’re killed, dogs that are boiled alive, dogs are killed in front of other dogs.”

Many of these dogs are not strays, as they can be difficult to catch, but healthy, friendly pets who are eager to make a new friend.

“It’s very common to have dogs stolen in Hanoi, even if you let the dog go out on its own for just a few minutes,” said Tuan Bendixsen of the Animals Asia Foundation in Hanoi. Of his in-laws dog he said, “One day they opened the front door, the dog went out and in 10 seconds it was gone.”

Community members have banded together to stop pet thieves they know to be lurking in their neighborhoods.

“Thieves sometimes get beaten up or killed by the owners,” Tuan said.

Because the only dogs allowed to be brought into these countries must have proper documentation, they are trafficked instead, which allows for rabies to flourish. Many of the dogs used as meat have rabies, and is the reason for the crackdown on the trade. Consumers can also contract cholera and trichinosis.

“Realistically we have to look at this,” said Tuan. “We’d love to change people’s minds about how to treat dogs, but in the near future we need to work on the health issue.”

For many in Asia, eating dogs is as commonplace as eating burgers or fried chicken in the US, and the cows and chickens over here are treated no better. The new laws being put into place may not suddenly enlighten people who value the tradition of eating dog meat, but it can be hoped that the threat of rabies will curb their appetites.