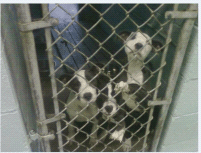 Like so many other stories, Mac, Petey, Piper and Percy’s rescue started with many late night phone calls, text messages and desperate pleas. Four pit bulls needed rescue after a drug raid in a local inner city neighborhood.

The conditions the dogs were living in were horrible and no other rescue wanted to touch them, knowing that they had been in direct contact with a puppy that had contracted parvo. It was assumed they would fall ill too.

When someone noted that they needed a rescue crazy enough to take all four, immediately they knew exactly who would do such a thing. Pathway to Hope, a rescue organization in New Jersey, immediately stepped up, not willing to accept such a negative prognosis without giving these pups a fighting chance.

Did they have the money? No, but they had the support of an amazing network of volunteers and had faith that they would work it out for the sake of the dogs.

So, they began by reaching out immediately to the vet, who agreed to quarantine and treat the pups. It was a miracle when none of these babies got sick! Once medically cleared, each dog was placed with a Pathway foster family. These foster families are very special, dedicating their time to training and caring for their rescues and are fully involved in the adoption process.

Mac, Petey, Piper and Percy have all since found their forever homes. Staying true to the Pathway motto, “Nobody made a greater mistake than he who did nothing because he could only do a little” (Edmund Burke). They just couldn’t turn their backs on them. Even when many others thought a group of possibly sick pit bulls found during a drug raid was a lost cause, Pathway knew they couldn’t turn their backs on them.

A Pathway to Hope is committed to championing for this breed and will continue to work tirelessly to spread awareness. Seeing the smiling faces and wagging tails in the happy ending photos is more than enough to keep them going.

It is stories like these that motivate them to come up with creative fundraising campaigns so that they can continue to fund their efforts.  Pathway is completely not for profit and relies 100% on volunteers.

In the name of Mac, Petey, Piper, Percy and the countless other abandoned, abused and neglected pit bulls, one volunteer and foster, Scott, thought of a unique and creative way to raise awareness and donations for A Pathway to Hope.

There will be an amateur, mixed martial arts (MMA) fight on September 27th, which Scott and others will take part in. This is not your traditional fundraiser! Scott and his wife have launched a “go fund me” page, hoping to raise $2,500. 100% of donations will go to A Pathway to Hope, enabling them to continue rescuing dogs in need and educating people about the plight of pit bulls.

You can visit the Go Fund Me page at: http://www.gofundme.com/dxfjic