At Vancouver’s Canine Adventure Den, there are no kennels. There are however, loads of toys, a pool and pigs. Yes, pigs. Live ones. That play with the dogs.

“The pigs hang out with the little dogs and the puppies,” owner Kirsten MacGregor told CBC News. “And they love it.”

It’s also a round-the-clock operation. 24/7. MacGregor has found her services increasingly in demand. Pet owners — many of them with occupations such as nurse, doctor and paramedic — often drop their dogs off at odd hours due to their jobs.

And so in a city where the housing market often makes finding a place to live challenging, MacGregor is looking to snag a competent graveyard-shift employee with an enticing Craigslist ad.

For five overnight shifts a week, she’d like to hire a snuggly dog handler in exchange for free housing plus $800 a week.

Her ad has been hot on Craigslist for a few weeks, even though the salary seems low at first look.

“The lodging comes out of your pay,” she said, adding that once accommodation is deducted, the worker comes out with about $800 per month, with the chance to work extra shifts. 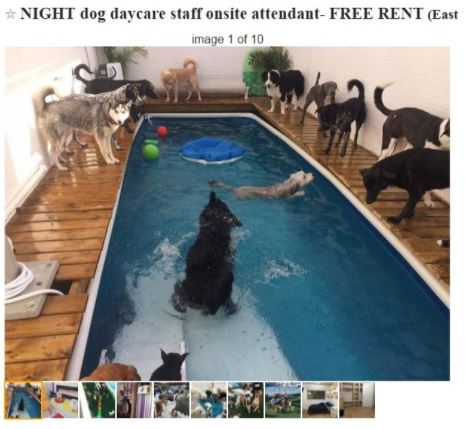 “We got a few resumes, so now [we’re] just figuring out who is best fitted and who we feel secure leaving the dogs in their care,” she said. They want motivated worker, not the sleep-on-the-job sort.

Workers will be permitted to bring their pups to work, a cool perk in a city where pet-friendly rentals can be hard to come by.

“The hardest thing is finding accommodation with dogs,” she said. “There’s nowhere to go with your dogs anymore. People are having to go further and further out of the city. They’re having to live in Surrey, Coquitlam or Langley in order to keep their dogs.”

Of course, dog lovers will also enjoy spending their evenings surrounded by loads of adorable-sweet pups.

“We let the dogs just sleep with all their friends and have a big slumber party.”

Probably best to leave the pillow fights to the humans, though!