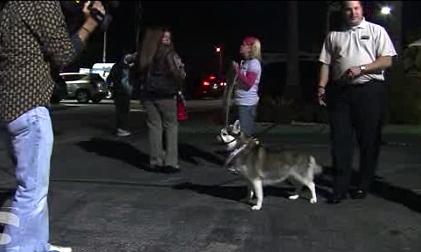 Broward County’s canine death row dog Brandie was released Friday to her relieved family, who fought for months and spent thousands of dollars saving their pet’s life. The dog was branded as dangerous for killing an unleashed teacup poodle that ran up to her while she was on a walk in her Coconut Creek neighborhood.

Brandie, an 11-year-old husky, was seen leaving the pound wearing a mesh muzzle and sporting a “Dangerous Dog” tag.

Substantial press coverage and heat from the local community are said to have been factors in her release. Brandie is one of at least 59 dogs sentenced to die under Broward County’s 2008 dangerous dog ordinance, and is among the few who were not euthanized.  Beth Lipsky, Brandie’s owner said, “It teaches us all a lesson, that you can fight City Hall with the community holding you up on (its) shoulders.”