Guy the beagle has gotten loads of attention since becoming the signature “rags to riches” story of the shelter-dog universe. His story – as much of it as we know, anyway – begins with our hero dog lost in the woods of Kentucky and ends with his moving to Kensington Palace, courtesy of the young actress who adopted him from a rescue in Canada, and then went on to be the newest member of the Royal Family.

Now, Guy has apparently “written” his story for the benefit of fans (and hopefully new generations of adopters-not-shoppers!) around the world. According to the Daily Mail, it is set for release in November.

Its full title – His Royal Dogness:The Rebarkable Stoory of Meghan Markle’s Rescue Dog, is reported to be officially endorsed by Markle’s new family, with help from co-authors Camille March and Emmy-winning writer and producer Mike Brumm. It was illustrated by artist Gerald Keller. 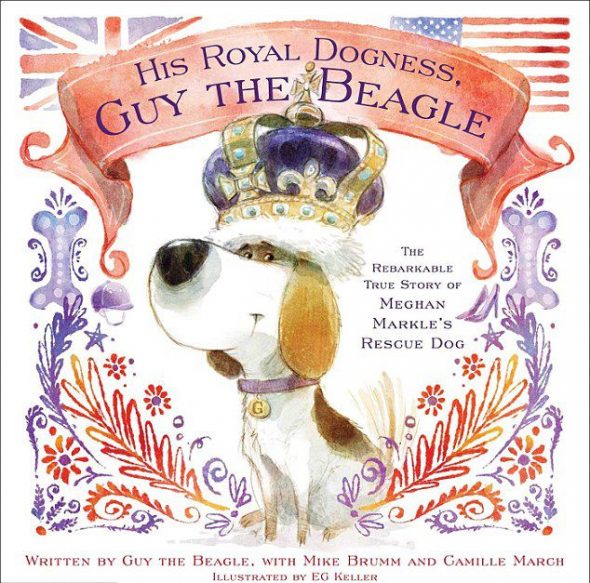 You can pre-order it on Amazon already, in fact!

Back in November of 2017, just after it was announced that Markle was engaged to Prince Harry, news broke that she’d taken Guy from her then-home in Toronto to London, settling into Nottingham Cottage at Kensington Palace. It was also much reported that Markle made a difficult decision, too, leaving her other rescue pup, Bogart, behind. The senior dog was reportedly too frail to make the trip.

Guy, as many now know, was found wandering and eventually made his way into the hands of A Dog’s Dream Rescue in Toronto. Markle saw him at an adoption event, fell in love, took him home and the rest is now a fairy-tale story if ever there was. From the Kentucky woods to paparazzi chasing him as he reportedly rode in a limo with the Queen herself.

In an interview earlier this year, the Duchess of Sussex revealed: “One [dog] is now staying with very close friends and my other, little Guy, he’s in the UK, he’s been here for a while.”

During her time filming the show “Suits” in Toronto, Markle regularly posted photos of her dogs on her former Instagram account.

We recently reported that last month, the royal couple reportedly welcomed a new dog called Oz to their family. Photos have yet to emerge of the new pup, but we’re betting that Guy’s tell-all book will be a big seller for the upcoming holiday shopping season.