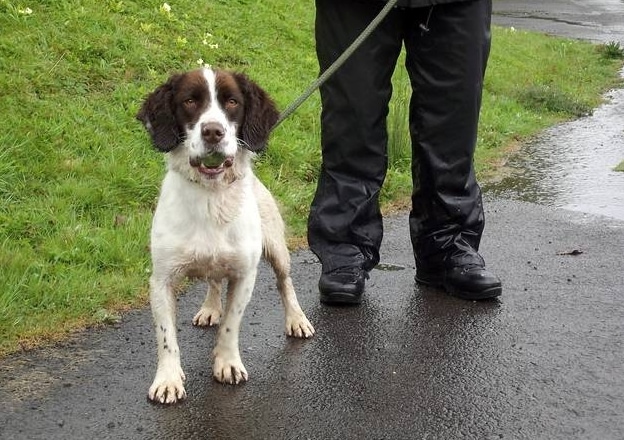 Grouse the Springer spaniel has finally found a home, and his purpose in life. As a young puppy, he was taken to the Blue Cross shelter in Kimpton. He was picked up as a stray, so very little is known about his early life, other than that he was malnourished, thin, and clearly unwanted.

After treatment at the shelter, staff and volunteers began to work with him, to assess his suitability for rehoming, and to get him used to playing, and being handled in a caring manner. The staff quickly came to realize that Grouse was something special – incredibly intelligent, and very inquisitive, needing lots of mental stimulation, and picking up new skills exceptionally quickly.

They decided they wanted a very special place for Grouse, and contacted the Malpeet K9 Academy in South Wales, who came out to assess his suitability as a candidate. Simon Mallin, director of the canine academy said, “after only a few minutes of playing with Grouse I knew he had exactly what I was looking for.”

Grouse was rehomed with the academy, and embarked on an intense, but fun, training course, full of excitement and stimulation. He graduated at the highest grade, and was also graded in the very top percentile when assessed by the Metropolitan Police.

Grouse now has a new life: having been rescued, and given the chance to fulfill his potential, Grouse has also found his calling – working as an explosives detection dog. His first assignment as a fully fledged member of the team is working at the London Olympic Games, keeping everyone safe from the threat of explosives – and having great fun while he’s doing it.

Lynn Campbell, manager of the Blue Cross Center in Kimpton said, “Many animals come to Blue Cross looking for a second chance in life so it is always wonderful when they go on to realize their full potential.”

The Blue Cross is a no-kill shelter, never euthanizing any healthy animal. They primarily rescue dogs and cats, although they are willing to rescue any domestic animal. They are funded entirely by public donation, and have veterinary treatment centers where owners on a low income or in financial crisis can have their animals treated free of charge.