Parade-goers were surprised to witness Frosty the snowman being hauled off in cuffs at the annual Christmas parade in Chestertown, Maryland. 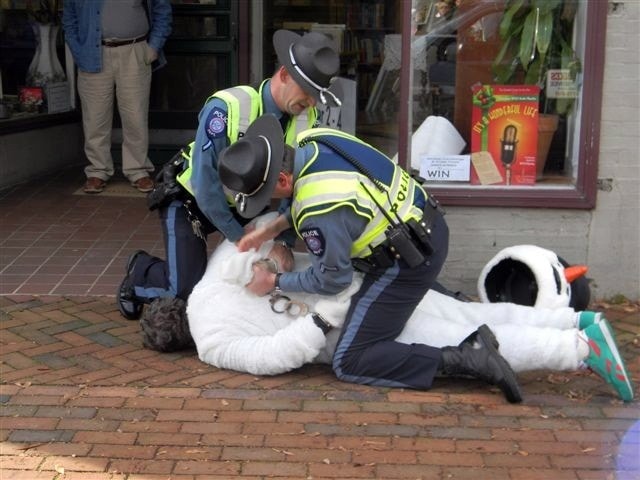 Kevin Michael Walsh, 52, of Chestertown faces charges for assaulting two officers and kicking a police dog in a scuffle on Saturday morning.

Police said K-9 unit Henzo and handler Pfc. James Walker were working traffic patrol for the parade when Walsh kicked the dog. Walker escorted Walsh away from the crowd when things became heated: Police say Walsh hit Walker in the face with the head of his Frosty costume when he removed it.

A second officer joined Walker to assist, and as Walker and officer Heinefield were placing Walsh in the back of the patrol car, Walsh allegedly shoved Heinefield. The Cecil Whig reports that Walsh could be heard screaming over the din of the parade, “You have no right to arrest me.”

Walsh told The Associated Press that for over ten years he has attended the parade as frosty without incident, and that he was wrongfully arrested, claiming that the officer harassed him after he made a remark about the police dog.

Sgt. John A. Dolgos. said Walsh was to be taken to the district court commissioner’s office after processing for a bond hearing, where he would also be charged with disorderly conduct.