For Allentown, New Jersey resident, Dina Alborano, February 4, 2015, and the subsequent days were just a nightmare. Alborano’s six-year old German Shepherd, named River, got out of her backyard and got lost in the woods. He was found clinging to life and frozen to the ground 5.5 miles away from home. 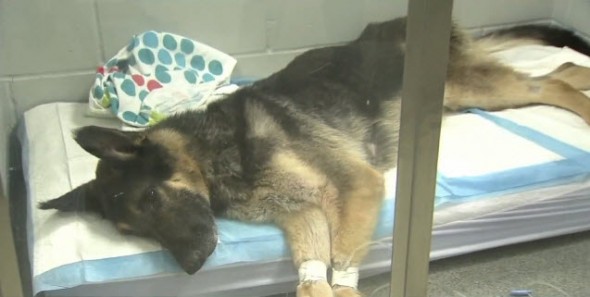 When River got lost the pet owner didn’t know what to do. However, being an experienced snow shoe racer, Alborano took it upon herself to go into the woods daily and find her beloved dog.

“I was just out of my mind ,” the pet owner told ABC News. “It’s just the fact of not knowing. It just eats you away.”

Allentown faced a brutal cold front when the dog got lost and the pet owner feared her pet wouldn’t survive out in the woods much longer. For six days Alborano tracked miles through the snow, until she came upon an emaciated dog frozen to the ground and she knew that was her lost pet.

River lost 30 pounds during those six days and was very dehydrated. He was rushed to NorthStar VETS where he was treated during seven days before getting released home.

The dog was so weak he couldn’t stand on his own and required the help of veterinary staff to stand and walk. River required blood transfusions, constant IV fluids and pain medication to help him recover.

On Feb. 12, the German Shepherd was well enough to go home.

“With a seven day stay at NorthStar behind him and a roller coaster ride of medical problems fixed, our Star patient gets to go home!” posted NosrthStar Vets on their Facebook wall. “Now he will rest and recuperate. River’s family sends all of you their heartfelt thanks for your well wishes and prayers:-)”

Alborano was very thankful for the attention her pet received at the hospital. She said that even though her dog was not completely out of the woods when released, she was confident River would make a full recovery.