A stray dog from El Higueron, Spain, is lucky to be alive today after it got hit by a car. What saved the pet’s life was getting stuck in the car’s front bumper after the accident.

The man behind the wheel said he was surprised when the stray dog jumped in front of his car. Moreover, the driver was saddened when he couldn’t stop the vehicle in time to avoid hitting the pet. 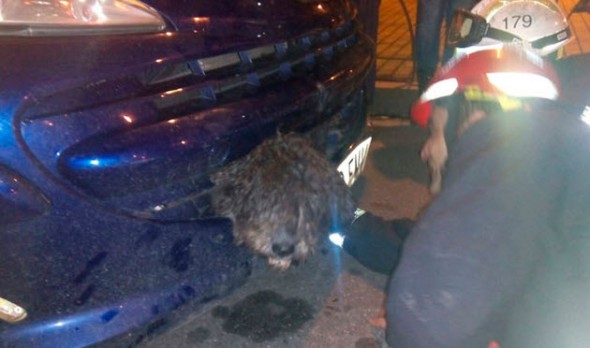 Right after the accident, the responsible car owner stopped to check on the dog. After not being able to locate the pet on the street or in the surrounding area, he walked to the front of his car and found the pet trapped between the bumper and the vehicle’s grill. The man tried to free the dog but couldn’t pull the pet out.

With no other option but to continue driving, the motorist carefully drove to a nearby animal clinic where he contacted police and firefighters. Rescuers arrived and pulled the pet out of the vehicle. Veterinarians were ready to check their four-legged patient and said the pet was lucky to only suffer minor scrapes.

Experts say that what saved the pet’s life was getting stuck in the vehicle and not get run-over by the car.