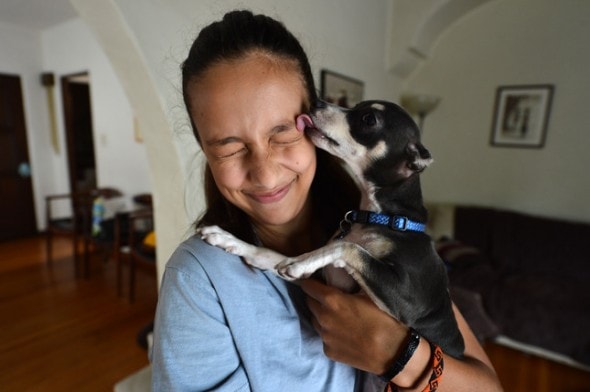 Chloe Levenson and Buddy are a match made in heaven.  Both have had to suffer severe burns, and a lengthy recovery period to get back into good health, but the pair are working through things together.

“He’s my baby.  He’s definitely my baby,” said Chloe.  She adopted Buddy last week.  Buddy was put through quite an ordeal.  He had chemical burns all over his body, and required months of medical care.

Chloe has been through the medical ringer as well.  She has had to go through seven surgeries, and still has regular treatment due to the second and third degree burns she has suffered.  As a baby, someone spilled a scalding cup of tea on her.

The two were brought together through a Pittsburg, Pennsylvania rescue group called Umbrella of Hope.  They felt that the dog would do much better in a home that was well equipped, and familiar with how one deals with severe burns.  They figured that someone who’s dealt with a similar situation, would be more compassionate towards him and his sometimes anti-social behaviour.

There were many people that had heard about the puppy and his situation.  Many tried to express interest in the small dog, and many offers to adopt him were submitted.  However, most of these people lost interest when it came time to tell them about the post traumatic stress disorder or PTSD he was suffering with also.

His foster mom Kristy Keusch said, “He had a lot of strings attached.”  She got to be with him the first four months into the healing process, and things weren’t always easy.

Umbrella of Hope paid an estimated $5,000 in medical care for the dog.  This included surgery, vaccinations, microchipping and neutering.  And even though the physical wounds were healing, the emotional wounds were not.

The dog would begin to shake at the sight of a collar, didn’t like to get hugs and very much disliked being touched on the head or neck.  He did like it when someone would rub what was left of his ears, but ultimately, any physical contact with him ws only when he wanted it or allowed someone to do so.  Otherwise, one could get a nasty little bite.

Kristy Keusch knows all too well about too much physical contact with the dog.  She’s been on the receiving end of more than one bite from him, and is the person that put in lots of time with him to work on his mental issues.  She also knew that anyone that finally adopted the poor little dog would have to have tons of patients with him, and be willing to put in the same amount of effort, if not more, than she has had to.

Umbrella of Hope had been seeking a home for Buddy, who also responds to Fireman.  Through the Shriners Hospital for Children is how the rescue and the Levenson’s got wind of Buddy, and so far, everything has been great.

There’s still a lot of work to be done with him.  Something Chloe and her family know all to well, and seem to be doing really well with.  He still growls a bit and still can snap at people that get too close or touch him the incorrect way, but he is getting much, much better.  Both he and Chloe get on quite well, and seem to have a good understanding of each other. 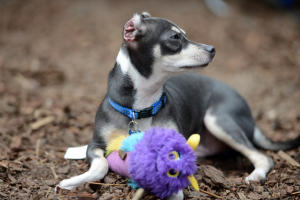