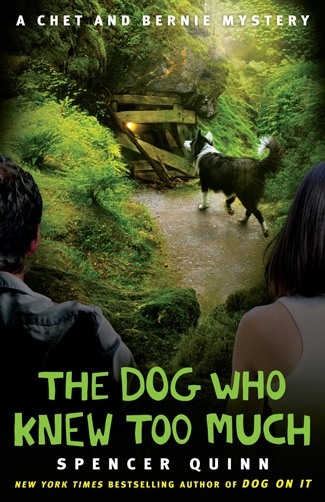 Combining suspense and intrigue with a wonderfully humorous take on the link between man and beast, Spencer Quinn’s exceptional mystery series has captured widespread praise since its New York Times bestselling debut, Dog on It. The Dog Who Knew Too Much marks the duo’s triumphant return in a tale that’s full of surprises.

Bernie is invited to give the keynote speech at the Great Western Private Eye Convention, but it’s Chet that the bigshot P.I. in charge has secret plans for. Meanwhile Chet and Bernie are hired to find a kid who has gone missing from a wilderness camp in the high country. The boy’s mother thinks the boy’s father—her ex—has snatched the boy, but Chet makes a find that sends the case in a new and dangerous direction. As if that weren’t enough, matters get complicated at home when a stray puppy that looks suspiciously like Chet shows up. Affairs of the heart collide with a job that’s never been tougher, requiring our two intrepid sleuths to depend on each other as never before. The Dog Who Knew Too Much is classic Spencer Quinn, offering page-turning entertainment that’s not just for dog-lovers.

As Spencer Quinn, Peter Abrahams writes the Chet and Bernie mystery series, the first of which, DOG ON IT, reached #7 on the New York Times bestseller list. The second Chet and Bernie book, THEREBY HANGS A TAIL, came out in January 2010, and was also a New York Times bestseller, as was the third, TO FETCH A THIEF (September 2010). In a starred review, Publishers Weekly said To Fetch A Thief “radiates pure comedic genius via Chet’s doggy bright narrative. You don’t have to be a dog lover to enjoy this deliciously addictive series.” Book four in the series, THE DOG WHO KNEW TOO MUCH, will be published in September 2011. Abrahams lives with his family on Cape Cod. Chet the Dog has a website – www.chetthedog.com, and that Peter guy does too – www.peterabrahams.com.

Today’s TEN giveaway winners will each receive a free copy of The Dog Who Knew Too Much by mail. As always, only those in our e-mail list are eligible to enter, and if you’re not subscribed, you can fix that in five seconds by clicking here. When your first daily digest e-mail arrives, hit reply, type the words “contest entry” in the subject and send (current subscribers can reply to today’s digest). We’ll use random.org to select winners, who will be notified by e-mail. Entries will be accepted through midnight Sunday: please note that this contest is open to US and Canadian residents only.

1 thought on “Giveaway: The Dog Who Knew Too Much”