At one time, the only option for people with overly aggressive dogs was to euthanize them, but thanks to Positive K-9 that is changing.  Positive K-9 takes on the training and rehabilitation of dogs that are known to have attacked and injured other dogs or people.  These are dogs that some thought were hopeless causes, but in most cases the rehab is successful and the pets go on to have long and happy lives with their families.

Just ask Jordan Copie, who had to get 41 stitches in his face following an attack by his dog Tank.  Copie had been trying to give his dog medication for an ear infection and Tank lunged at him, biting into his face, which required reconstructive surgery to repair.  “It was very scary for my wife and I,” he said. “My wife was constantly scared of him. She was constantly nervous and didn’t want to interact with him much because she really didn’t know what Tank was going to do next.” But Copie and his wife loved Tank, and knew they had to find an alternative to euthanasia to save their 4 year old english bulldog.  So they contacted Positive K-9 in Walworth, NY. 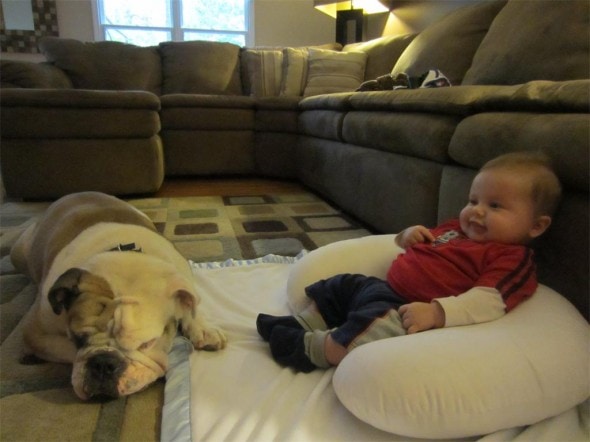 Since then Tank is a much different dog.  He is obedient and follows commands and the Copies feel completely safe around him.  They now have a 4 month old baby and that hasn’t bothered Tank at all, they are one happy family.  Master trainer Melissa Cocola specializes in rehabilitating aggressive dogs, many of which come to her by court mandate.  Cocola worked with Tank to eliminate his need to protect his food by replacing it with better food.  This had the effect of actually making him hope that if someone came near his dish he might get something better, so he behaved.

Discovering what motivates the dog is often the key to success and that differs in each case.  “I know initially when someone witnesses a family member or someone they love be injured by the dog, they have a knee-jerk reaction to euthanize the dog,” said Cocola. “But by the time they pick up the phone, they want help.”  This is also true for Sandy and Anthony Ciaccia who have a 4-year-old Boston terrier named Sophia who bit Sandy so hard that she needed stitches.  But  Anthony is battling cancer, and euthanizing her was out of the question as they love her like a child so now Sophia is training at Postive K-9 as well.  While there is no guarantee, in 17 years Cocola has only seen 6 dogs that she felt could not be rehabilitated, and sadly they had to be euthanized.

Two years after his training, Jordan Copie and his wife are thrilled to have spent the time and energy working with Tank, and their belief in him really saved his life.  “This experience has changed our lives with Tank,” Copie said. “The responsibilities of having a dog like tank can be very challenging at times, but it’s worth it and fulfilling.”