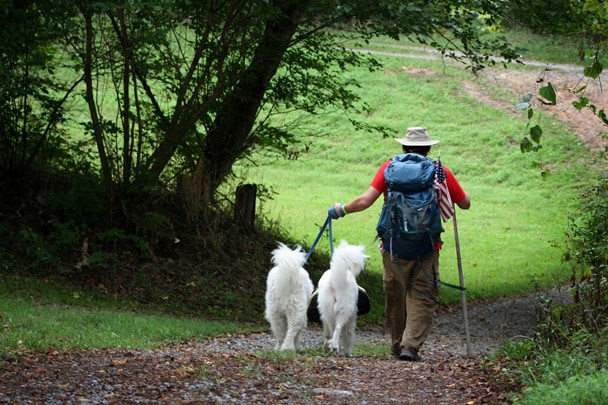 Luke Robinson on the road with Murphy and Hudson

Most people take their dogs for walks around the block or, if the dogs are lucky, a brief romp in the park. Luke Robinson has taken his pups more than 2,000 miles — for a cause.

In March 2008, Robinson sold his truck and set off on a cross-country ramble with his two dogs, Murphy and Hudson.

The goal? To walk all the way from Austin, Texas, to Boston, telling people along the way about Malcolm, another Great Pyrenees dog that Robinson used to own.

Malcolm died of metastatic bone cancer in 2006, and Robinson said he never expected the diagnosis.

“He was my boy,” Robinson said. “I never had such a bond with a dog before Malcolm.”

So Robinson set off on his epic trek to call attention to canine cancer — and to do his part to prevent it.

“The most important thing about our mission is really just sharing Malcolm’s story and going out and talking to people about canine cancer and comparative oncology,” Robinson said. “This is not a race.”

Robinson said he’s logged over 2,300 miles and it’s been “quite a journey.”

Robinson treated himself and his dogs to a hotel room Thursday night, he said.

“It was a long day for us,” he said. “They were a little tired, and I decided they needed to be spoiled.”

The trio will walk on Route 1 or 1A all the way to Boston, Robinson said.

“We’d love to have anybody come out and say hi,” he said.

Robinson and his dogs have received help throughout their journey. A California-based dog food company supplied food for the canines, while a Vermont-based company provided them with treats.

Although Robinson brought a tent with them, host families have also given them shelter.

“The great days exceed the tough days,” Robinson said. “People have been very gracious and generous.”

The trio always insists on being dropped off in the morning where they were picked up at the end of the day, said Ginger Morgan, who met Robinson when he walked through Memphis in 2008 and has been helping him ever since.

“He’s walked every step of the way,” Morgan said.

When Robinson crossed into Massachusetts Thursday just after 4 p.m., it was the 16th and final state in their journey. Boston is where Robinson lived when Malcolm was diagnosed.

“We’re coming home,” Robinson said Thursday. “God willing, we’ll be there in a week and a day. I can’t wait.”

On June 19, Robinson will walk his final mile from the Back Bay Fens to Boston Common. More than 100 people from 20 different states plan to join him.

Vendors and rescue groups will be waiting at the Parkman Bandstand in the Common for a celebration. The Canine Hereditary Cancer Consortium will also be on hand to take blood samples from dogs that have had cancer.

“If anyone in the Boston area has a dog with cancer, they should come,” Morgan said. “That sample will be used for research and comparative oncology to find better prevention. It will help humans as well.”

In the meantime, the trio still has a little more walking to do, Robinson said.

“We’ve seen a lot of beautiful country,” he said. “It’s really been an amazing journey.”

Robinson with his two dogs