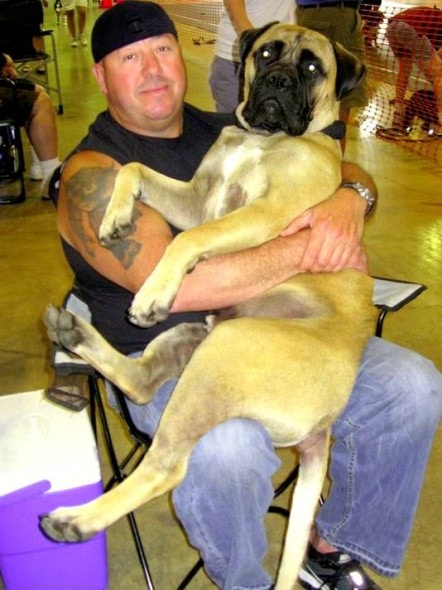 An Oregon sergeant of the Polk County Sheriff’s Office sadly lost his life when his vehicle crashed into a highway barrier.  His beloved bullmastiff Truman was inside at the time, and though wounded, fled from the scene.  A dog lover found him, and because of his dedication, Truman was reunited with his grieving family.

On July 18th, Randy W. Whittaker was traveling through West Salem on Highway 22 and when he lost control of his vehicle and smashed into a cement median after moving into the left lane.  His baby, bullmastiff Truman, was with him when he died.

Shaken, Truman ran away from the scene.  Frankie Mendez and his girlfriend and her goddaughters were in a Safeway parking lot when they saw the frantic dog running around.  Others around them didn’t pay attention to the dog, or were afraid to approach the 120-pound dog.

“He had patches of blood on his fur and his leg was shaking bad,” Frankie said. “I thought, ‘you know people leave their dogs in the beds of pickups,’ that he might have jumped out of a truck.  He was frantic and racing around and people were pointing and saying ‘look at that dog,’ but no one was doing anything to help him.”

The dog lover had a soft spot for the big, frightened dog – he once owned a pit bull/mastiff mix, but it was taken from him after it bit somebody.  So he knew he had to help. 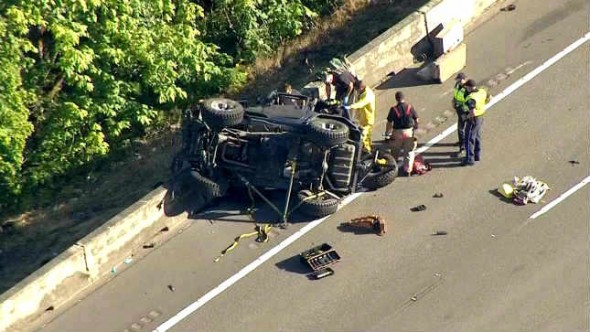 “I approached him, with caution, of course, but I went to him and he calmed down a bit,” Frankie explained.

He had the girls go into a nearby Dollar Tree to get a collar for Truman, who wasn’t wearing one.

“The dollar store didn’t have leashes, so I used my belt because I didn’t want him to run again,” Frankie said.  “He just stayed put.”

The devoted man gave Truman some water and walked around the parking lot, asking people if they knew who the dog’s owner was, but he was a stranger to everyone.

“We waited about an hour or so, hoping someone would come get the dog,” Frankie said. “But no one did. Then some people told me there was a vet’s office just down the street, so I took the dog there, hoping it had a microchip.”

The West Salem Animal Clinic checked Truman over for any serious injuries, and scanned him for a microchip.  They were successful, and called his family.

Whittaker’s wife of over 20 years had no idea that her husband had been killed, and thought that Truman had gotten loose while they were visiting a family member.  Suzy couldn’t get to the clinic right away, and asked her friend Joni Fry to collect him.

It took Joni nearly an hour to get there, as traffic had backed up because of the accident.  In the meantime, Polk County Sheriff and Salem Police Department officers looking for Truman arrived at the clinic.  Mendez had gotten a kennel for Truman, and waited until the police relieved him.  He was not told what happened, but put the pieces together later when he learned of the accident. 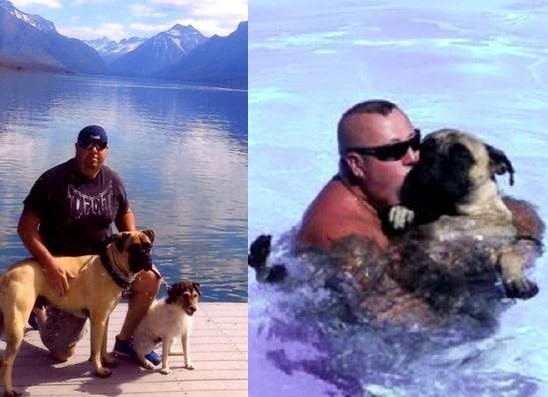 Joni was informed of Whittaker’s death, and was asked by officers to accompany them to the Whittakers’ home to break the news to Suzy and their five Jack Russell terriers, one Australian shepherd and one Rottweiler.

“I’m so grateful to Frankie for his time and consideration; just knowing to take a dog for a microchip scan; not everyone would do that,” Joni said.  “Someone could have easily stolen the dog or just ignored it. He was so confused and scared. Frankie really was a comfort to Truman. The poor fella shook for two days. He was so devoted to Randy that he would whine on a normal day when Randy was just at work. This has been so hard on them all.”

Suzy says that Truman was traumatized by the accident, and spent the first few days afterward running around the house looking for Randy, and jumping around every time someone came up the driveway to visit.  The confused, gentle giant desperately misses his daddy.

“But he’s doing better now,” Suzy said tearfully.  “He’s not crying for Randy as much and he’s staying with me and keeping me company on the couch.  I want to say I love the man (Frankie) for holding onto him. I very much consider Frankie a hero for what he did, and I know Randy would, too. He has been the one bright spot in this whole thing.”

Suzy is planning to meet with Frankie to thank him.  She and Joni’s flyball club, Animal House, and another club, Muddy Paws, plan to honor him for helping Truman when no one else would.