According to the Messenger Post, “The new building, planned for 4446 Route 247, north of the intersection of Lake to Lake Road will house hundreds of dogs. The Planning Board unanimously approved a special use permit and site plan following a public hearing last week for the facility requested by Curtis and Jolene Martin.” 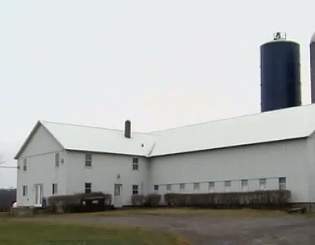 The Martins presented engineering and design plans to the board, noting that the facility would have a capacity of anywhere from 200 to 600 dogs. Curtis Martin was interviewed by a reporter from local news affiliate WHAM, who raised concerns about the puppy mill label. He maintained that this is not about money – he says he’s in the mass breeding business for the animals.

“We don’t just produce as many puppies as we can, that’s not our goal. Yes, we do have to do that but it’s not the main reason we’re in it. We’re in it for the animals,” he said.

If they’re in it for the animals, many question why the USDA previously cited Jolene Martin with failing to provide veterinary care for dogs at her existing breeding facility in Varick, NY. The Martins had 349 dogs and 124 puppies at the time, and the USDA violation report noted that “it does not appear that the facility has enough employees to carry out an acceptable level of husbandry for these animals. This needs to be addressed for the welfare of the animals.”

The Planning Board says it sees no reason not to approve the new venture. “It is a business in an agricultural district, a sound facility,” Planning Board Chairman Tom Harvey said.

“We have no jurisdiction to look at some of the more emotional issues of this,” Gorham Town Supervisor Fred Lightfoote adds.

Local animal advocates were alarmed at the news, and are scrambling to amass detractors in an attempt to stop the planned construction from going forward. Gorham resident and rescue volunteer Jennifer Baxter says the last thing she wants to see in her hometown is a puppy mill.

“They are designed to maximize profits and commonly disregard the physical, social, and emotional health of the dogs,” said Baxter.

If you would like to voice your opinion about the plans for this new breeding facility, there are a number of ways to do so. The Gorham Town Planning Board provides contact information on  its website. Additionally, a petition started by those concerned with animal welfare can be found at Change.org. The full planning board meeting notes are also available from the town.