York County, Pennsylvania residents Brandon and Aimie Terry’s Great Dane has finally had her puppies.  Much to their surprise, there were a total of 19 of them!

Great Danes typically have somewhere between seven to ten puppies in a single litter.  When Snowy last went to the vet for a check-up, the vet said they could count at least 15 little spines on the ultrasound.

One could sure imagine the surprise it must have been to see their dog give birth to a massive litter of 19.  All of the puppies are doing well, and now at about three weeks old, the little cuties are just opening their eyes.  Good luck with all of those puppies running about.

“It’s a shocker, but I’m glad that they’re all here,” Brandon Terry said.

“Right now they’re into exploring and playing, fighting with each other,” Aimie Terry said. 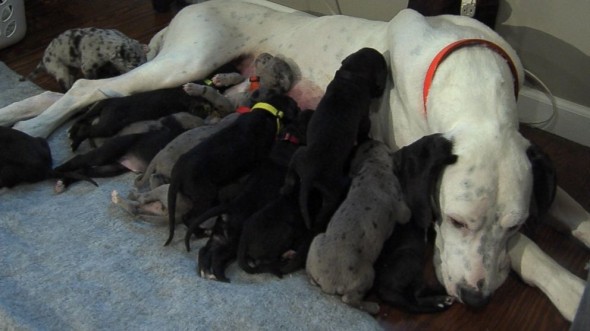 We here at Life With Dogs DO NOT promote breeders or breeding while so many animals perish in shelters – it was just incredible that the mother and all her puppies survived.  Hopefully they will all be spayed and neutered!