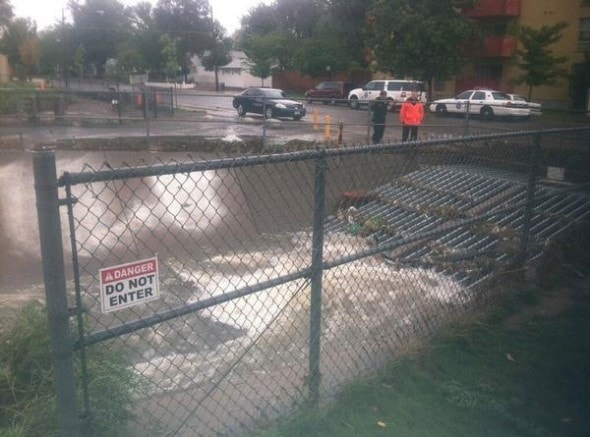 When a blind man in Denver was washed into a culvert Friday morning his guide dog came to the rescue.

Ronnie Webb was walking his dog around 8:30 am when floodwaters knocked him over. Denver police officer Del Creason was on patrol when he spotted the dog and noticed that it was preoccupied with something. Creason took a closer look and spotted Webb.

As Creason approached to aid Webb and his dog, Webb yelled for help and the dog jumped in after Webb.

“Right then, they both got sucked under 13th Avenue,” said Creason.

For 17 minutes Webb and his dog were in the tunnel underneath the streets. Creason knew the tunnels well enough to know where they would surface and with the help of a paramedic was able to help Webb and his dog out of the water.

“He and the dog were in the tunnel for 17 minutes,” said Creason. “I’m sure he used the dog to keep afloat.”

Creason gives all the credit to Webb’s dog, calling him the hero. Both Webb and the dog are doing well after their ordeal.