Klinger is a three-year-old German shepherd, and a fully trained and certified guide dog.  Just like any dog, Klinger like to play with his family.  However, Klinger recently “picked up a job” in his spare time.  He’s assisting to train a blind man who wants to run the Buffalo Marathon in New York.

Richard Hunter is a Marine veteran, and love endurance sports.  He has already run other regular marathons, and even an ultra-marathon!  Hunter suffers from a degenerative eye disease known as retinitis pigmentosa, and uses running and endurance sports as a form of rehabilitation.  He also wants to set a good example for his children.

“I wanted a model for my three daughters that you can still set ambitious goals in the face of adversity,” said Hunter. 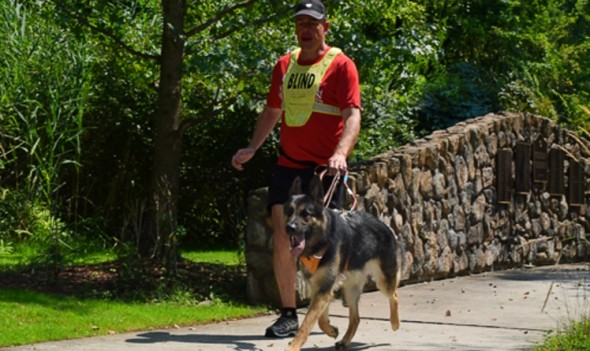 About three years ago, while riding on a bike, Hunter was hit head on by a car.  He pushed himself through recovery and began training again as soon as he could.  He would still train alone, which was a concern for his family.  What if something were to happen to him again?  This is when Hunter was introduced to Klinger.

Klinger came from Guiding Eyes for the Blind.  Guiding Eyes is based in New York, and trained Klinger.  He was raised with a specialized puppy raiser for his first two years, then spent eight months with Guiding Eyes.  With the dog, Hunter didn’t need to train alone, which gave family members a bit of peace of mind.

“It’s a much safer way for him to run short distances,” said Richard’s daughter Lindsey.  “Helps with running independence or else he’d be running by himself.” 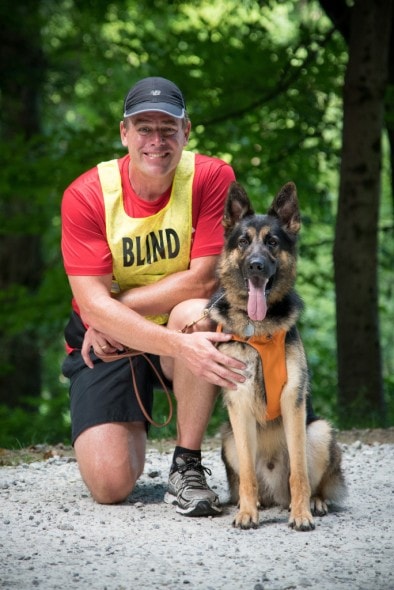 Hunter and Klinger have been training together ever since.  Klinger won’t be running with Hunter in the Buffalo Marathon.  This year is the first time that there will be a blind/visually impaired division running, so Hunter will be assisted by a member of the training staff with the Buffalo Bills.

“I don’t have any expectations of running a personal best, but we’re going to go out and have a great time. And Klinger will be at the finish line waiting for me with my daughter,” Hunter said. 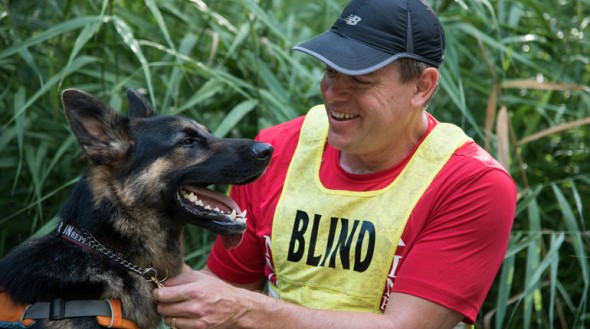