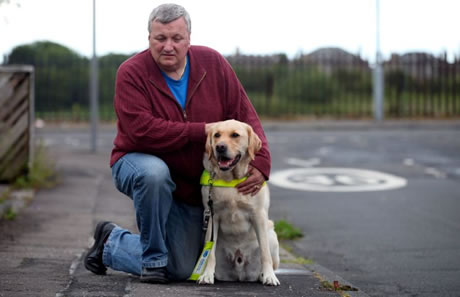 A heroic guide dog has recovered from injuries sustained in the process of saving his blind owner’s life. Kent, a four-year-old golden retriever, was leading owner Robert Ferguson, 57, across a busy road when a speeding vehicle careened toward them.

Robert said he could feel the brave pooch suddenly pulling hard on his harness, yanking him out of the street – just before Kent took the full impact himself.

Miraculously, Kent was not seriously hurt. Robert, who fell and hit his head on the pavement, needed 19 stitches.

Born blind from a condition that causes detached retinas, Ferguson says, “Kent saved my life. The car came out of nowhere but he saw it and made sure he pulled me out of the way.”

The driver of the car was eventually found guilty of driving without due care and consideration and was fined £250.

Ferguson was returning from a  shopping trip when the incident occurred. He said he listened carefully at the curb and did not hear any vehicles approaching. He and Kent were nearing the opposite side of the street when he heard the vehicle bearing down on them. The faithful dog, sensing impending danger, had put himself in harm’s way in the process of trying to save his master.

“If it wasn’t for him, I could have died,” Ferguson said. “Without Kent I would have difficulty getting by. I take him everywhere with me.”

Kent was rushed to a vet for x-rays, and remarkably, suffered only internal bruising from the impact – he was otherwise uninjured.  Ferguson suffered a minor injury that required stiches, but says that’s nothing compared to what could have happened. He beams as he looks at the dog who saved him.