This is a touching story submitted by one of our readers.  Anyone wishing to help out can get more information by following the links at the end of the story.

Last year we in Keeshond Rescue were notified of a puppy mill in New York that out of compliance and wanted to shut down.  We worked with people who were close to Marjorie Ingram, the kennel owner, and she signed an agreement to turn over her dogs to us.  Between November and February we were able to rescue 60 dogs in small groups.  Unfortunately in February she stopped complying with the agreement.  After months trying to negotiate with her representatives and talking to the State of NY about the condition of her kennel and her dogs, we have decided to go public with our campaign.  Following is the story of one of the 60 dogs that we have rescued and her remarkable recovery.

I got a call late on a cold December night that one special rescue was being …pulled from Marjorie’s Kennel, or should I say FREEZING COLD @%$# HOLE that is somehow called a kennel. This rusty wicked, worn-torn k-9 concentration camp with 40 years DEEP of dog crap, urine, mud, mange and filthy freakish manifestation of a dog breeder.

This female dog was ‘special’ and especially puppy mill war torn. She was bleeding, mostly hairless, pink, red and covered from head to toe with goo from puncture wounds and loads of bites. And mange, lots and lots of mange. She was small, her neck resembled elephant skin, grotesquely swollen beyond twice its normal size, pink, long vertical lines of puffiness from months of abuse, neglect and being on the bottom of a 30 dog pit of filth and hunger in Marjorie’s yard. There was not a square inch of her skin on any singular part of her body that was not pitted with a bite wound. She was fodder to all the other dogs that were hungry, tired, worn out. She was their punching bag, their only victim they could take out their daily frustrations upon. She was small, weak, and easy to beat.

I screamed with Dee, cried and called all whom I knew within hours of her new found release. I called all members I could track with Empire Keeshond Club. One was home, offered help and retrieved her the very next morning. She was initially called Baby. She was thin, weak, but now going on to warmth, food, love. She was moved along later to more intensive care for the difficult and protracted case of mange with a caring and talented vet down the East Coast. After some months of extensive care, vetting, rehab she went on to her final place of flourish in the Upper Midwest and is now known as Sapphire.

Today Sapphire lives in Minnesota with her forever family where she goes on daily walking adventures, plays with her brother KC in the back yard, loves going to puppy play class twice a week and is getting ready to start obedience class

A special spirit lives in her that keeps many of us moving ahead to get the remaining dogs OUT of the HELL HOLE they are captive in. Long live and flourish Sapphire for us all! 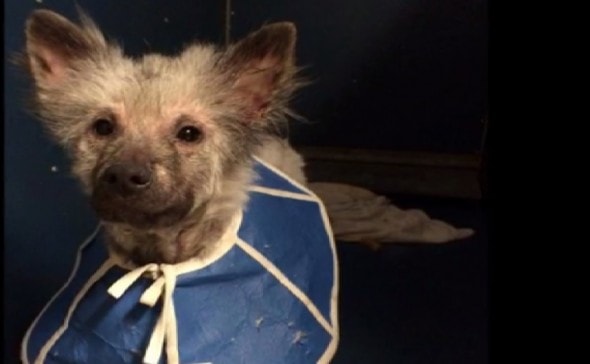