Dogs love to go for walks, right?  All of our dogs can barely contain themselves at the simple mention of particular words, and some practically go to pieces should you walk into the room with a leash in hand.  However, sometimes you get a situation like Harvey.  Harvey DOES NOT like going for walks.

The stubborn pooch is thought to be an American Staffordshire terrier.  It would seem it’s not just walks Harvey doesn’t like.  He won’t even get into the car to go to the park sometimes!  His humans had issues getting him into the car to go home from the shelter!

In the video, you can hear Harvey’s trying so hard to get him to cooperate.  Nothing doing!  Harvey DOES NOT want in.  The car door sits open, waiting to take him to what’s supposed to be a better place, but Harvey seems to not want to leave. 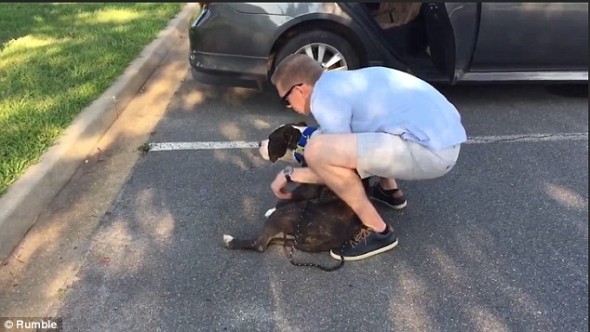 “Maybe it’s because the last time he got into a car, he was dropped off at a shelter,” said one of the people at the shelter.

Harvey just becomes dead weight every time the man tries to pick him up to put him in the car.  He goes completely limp, and attempts to glue himself in place.  In the video, one of the worst things that could have happened between a man and his new dog…

“I think I just touched his winky!” cries the man doing all he can to get Harvey to go.  “UGH!” 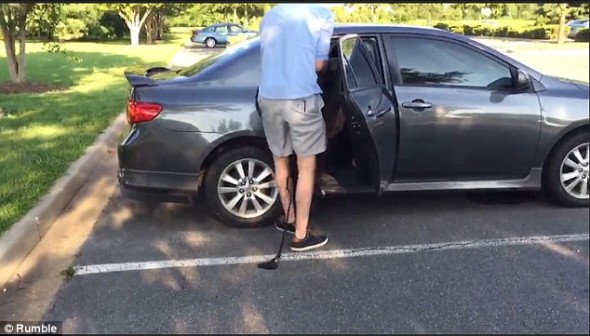 FINALLY, the man gets a good hold of Harvey and gets him into the car.  He whole ordeal is quite a thing to see, and very funny at times, too.  The news isn’t all bad though.  Harvey’s family says that he does like walks, and will get into the car now, knowing full well his forever family isn’t just going to dump him off somewhere scary, with lots of dogs and people that he doesn’t know.