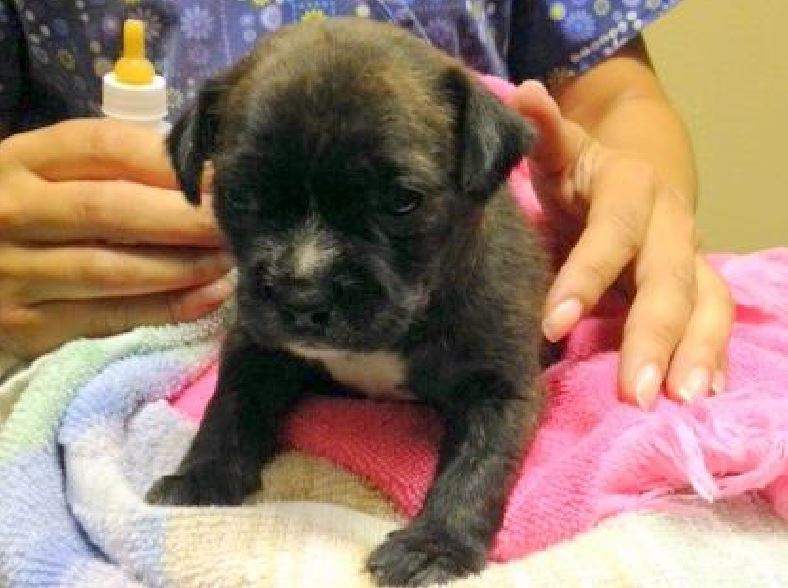 On July 10, 2014 around 9:45 a.m. a man dumped a 2 week old puppy in a black trash bag behind the trash dumpsters at the Planeview Travel Plaza in Oshkosh, Wisconsin along Hwy 41.

The puppy, named Hazel, was taken to the Oshkosh Humane Society for medical treatment, and she remains in their care. Hazel was in pain along her lower back and abdomen area when she was found, due to a suspected fractured pelvis.

Hazel is receiving physical therapy and is working hard to develop strength in her legs. A new video shows her walking around with the use of a brace. The brace pulls her legs under her as they should be instead of splayed out to the side.

She was found to have a serious skin infection that is being treated. She will probably have hydrotherapy sessions after he skin infection is resolved.

OHS was able to provide details on Hazel’s condition at Facebook on July 18, writing:

“Hazel, the puppy abandoned at the Planeview Travel Plaza in Oshkosh, was seen on Tuesday July 15, 2014 by Dr. Bruce VanEnkevort, a board certified veterinary surgeon, specializing in orthopedic surgery, at the Fox Valley Referral Center. Previous x-rays indicated possible orthopedic injuries which could have resulted in eventual surgery, although no definitive diagnosis was available at the time. According to Dr. VanEnkevort , new x-rays, along with a detailed physical examination revealed most of Hazel’s health issues appear to be congenital. The former owner was found and he said while he had Hazel, she never used her rear legs, although this has not been confirmed. Further inquiries revealed Hazel’s mother may be Boston Terrier. Hazel may be older than what the veterinarians initially thought because her puppy teeth are under-developed. Dr. VanEnkevort is treating Hazel for “Swimmer Puppy Syndrome,” characterized by a general weakness of the hind legs and an inability to walk by the typical age of 3 weeks. There may be some genetic influence making her more likely to inherit this ailment. Current treatment will be a series of braces and physical therapy to attempt to get Hazel to gain use of her rear limbs.”

Hazel is receiving the best of care and lots of love and her future looks bright.

OHS says: “This girl has got the spirit to do anything she wants! Go Hazel!”

.
OHS posted an update at Facebook on August 3, expressed in Hazel’s own voice, writing:

“Hazel here! I just had my first bath and “pawdicure” nail trim. I wasn’t totally sure what to think of the bath but it seems like it will be ok. Medicated baths will help with my skin condition. I have a doctor appointment tomorrow and will let you know how that goes. In the meantime, check out my pics from my spa day and [you can] watch my bath video.”

.
Here is OHS’s first video with Hazel, uploaded on July 11, the day after she was rescued:

Hazel recently took her first bath, under the careful supervision of Rubber Ducky: 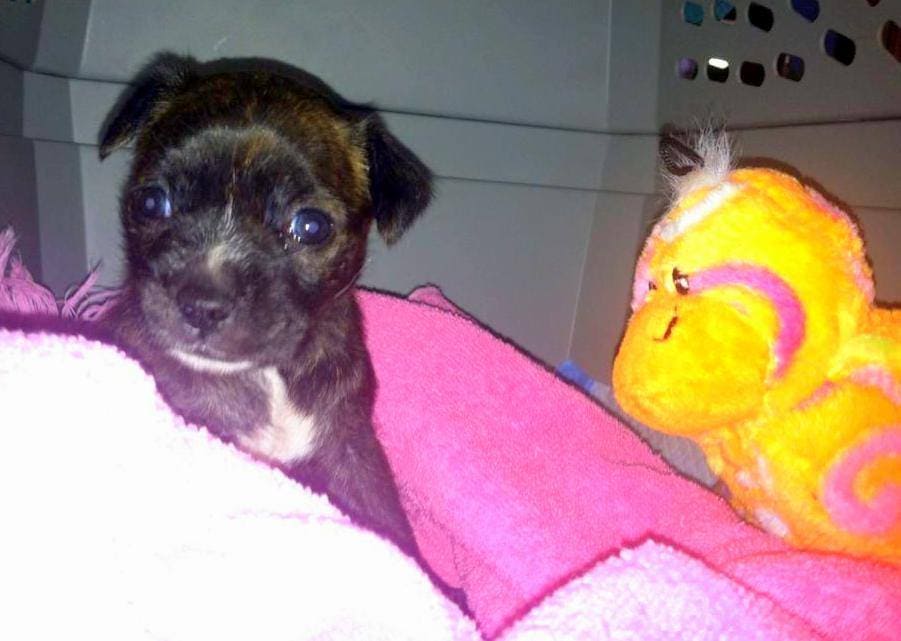