No Kill Kern, a rescue group out of Bakersfield, California, received a call about a dog that had been living in a field for over two months.  When volunteers got there, the sight their eyes fell upon was both beautiful and heartbreaking.  This poor dog lost her best friend when they were hit by a car, and she faithfully stayed by her fallen friend’s side, even after she had been reduced to nothing but bones.  Her loyalty has earned her the name Hachika, after the famously loyal dog of legend from Japan.

Most people that are big fans of dogs know who Hachiko is, but for those who don’t, he was a dog that was legendary for a loyalty shown by few other animals in this world – humans included. Hachiko waited in the same spot in the same train station in Japan that his human would arrive home on every day at the same time for nine years after his human’s passing.  At first, people’s reaction to the dog wasn’t exactly friendly.  However, once an article was done about him in 1932, people began to recognize him for the symbol of loyalty his is known as today, and even began to bring him food and water during his wait. 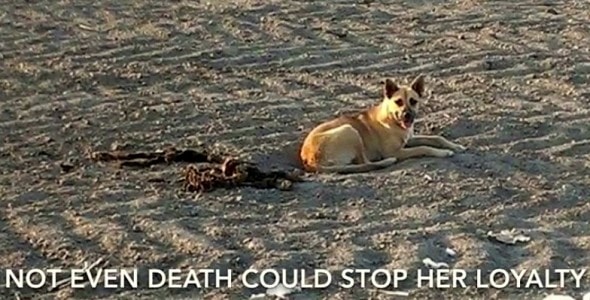 It would appear that our new friend here Hachika is cut from the same cloth as her namesake.  There’s isn’t a lot known about her past, but what is known is that she has absolutely refused to leave her friend’s side.  The dog that she palled around with had apparently been hit by a car at some point, and died either because of her injuries or because of the exposure, dehydration, and starvation she faced as a result of them.  Regardless, Hachika’s love for her friend meant that she wasn’t leaving her body until they both could be rescued.

Today, she has been adopted and is part of a loving forever family, but after seeing this video, her story will stay with you for a while, just as she did with her friend.  It’s comforting to know that despite how awful the world can seem at times, there are dogs like her that can teach us that change can start with us, and it isn’t that hard to do.