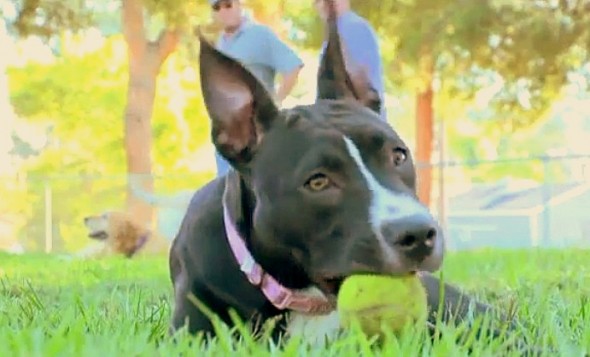 Just before Labor Day, a man walked with a pit bull over to a commercial building in Ramona, California, looked around, then threw the puppy over the fence and left.  He has yet to be identified, but in better news, little Dolly has since been adopted, and her new dad’s story is just too precious!

Multiple surveillance cameras outside of Investigative Science and Engineering, Inc. captured footage of a tall, tubby black man walking onto the property with a young pit bull in tow.  He cold-heartedly picked her up and sent her sailing over the high gate.  She landed hard on the rocks on her back, and looked stunned, probably having had the air knocked right out of her.

Fortunately, she was only slightly injured, but she spent an entire day in the scorching 95-degree heat with no water (or food).  She was discovered late in the afternoon the day after her abandonment, and only by chance.  Company vice president Karen Tavares returned to her office to finish paperwork and found the trapped pup.

She was taken to a Carlsbad shelter and examined by a vet.  Though she had a slight limp, the little dog named Dolly had no other injuries.  The surveillance video was released and was covered by a number of local news sources.  Dolly went up for adoption on Tuesday, and just the right person happened to see the newscast. 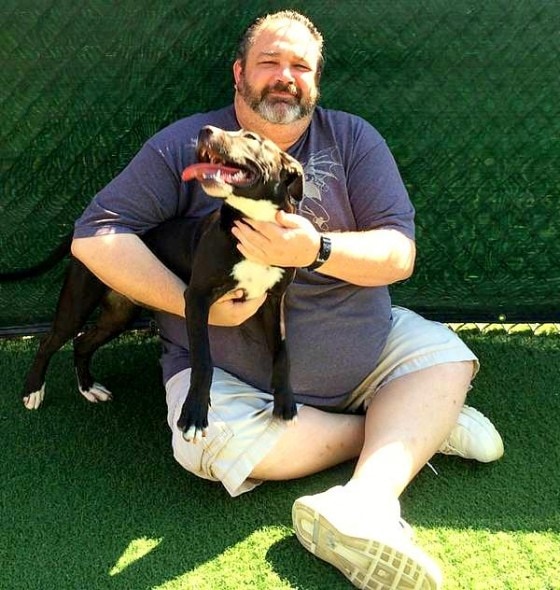 Bruce Phillips lost his 11-year-old black and white pit bull boxer mix two months ago to an incapacitating tumor.  He didn’t think he was ready to open his heart again so soon, but love keeps no schedule.

“It was like looking at Bella,” Phillips said.  “Like looking at her when she was a puppy.  I thought, ‘It can’t be a coincidence.’”

Now the six-month-old puppy has bounced back from her ordeal and is getting accustomed to life in her new home.  She is full of youthful energy and will need some training.  Phillips said that she likes to bark at other dogs, so buying her collar and leash was a noisy affair. 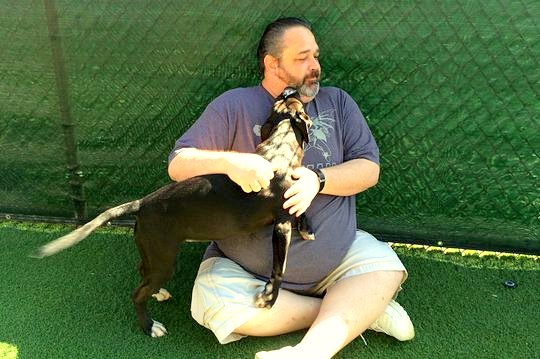 Even though her story was heartbreaking, what happened was not what made him want to adopt Dolly.

“When I got Bella, she was a found dog.  She was walking on a Poway road,” Phillips explained.  “I feel like I don’t pick my dogs – they pick me.  I believe in that stuff.”

The man who dumped Dolly has yet to be identified.  If you recognize him, please call the San Diego County Department of Animal Services at 760-966-3224.

“The fact that someone would take such a sweet dog and abandon it by throwing it over a fence is unconscionable,” said spokesman Dan DeSousa. “The Department of Animal Services would like to speak to the man in this video to ask him why he did such an act.”

DeSousa would also like to take the opportunity to remind people that most animals at shelters have similar stories of neglect, abuse, and abandonment – we just don’t know them.

“There are a lot of animals that have been there longer than Dolly that still need good homes.”