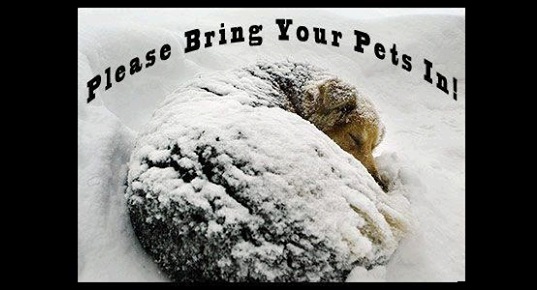 It has been an exceptionally frigid winter, but that hasn’t stopped many heartless pet owners from leaving their animals outside in the bitter cold, often with inadequate or no shelter. So what can you do to help?

Confront neighbors who think, “it’s just a dog,” explaining to them that cats and dogs are just as sensitive to cold as we are, and can easily die of frostbite and hypothermia.  If you’re a less confrontational person, put fliers in mailboxes or on bulletin boards of local businesses. 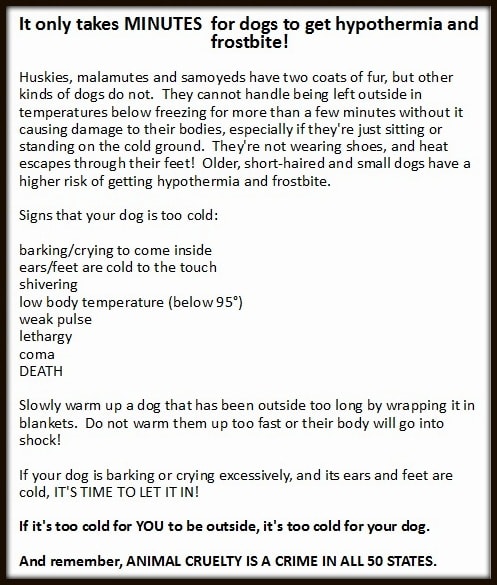 Buy or build dog houses (out of wood or (large) plastic totes) and line them with straw or sleeping bags (which can usually be purchased at thrift stores for around $5), and distribute them to unfeeling residents who won’t bring their pets inside. Dog sweaters, jackets and boots would be nice, too.

If people refuse to bring their pets in, call the police. Keep on them and animal control until something is done. While it may not be illegal to keep pets outdoors in the winter, it is illegal to do so without making sure they have proper shelters and access to food and water.

You can also share this article.  You might not have friends who would leave their pets in the cold, but you might have neighbors who do, and your friends have neighbors who might.  There are many of these people out there, and someone, somewhere has to know them. Get the word out!

Simple actions are what is necessary to save lives. Everyone can be a hero to one animal in need.

“I like to joke that my rescued greyhound, Jasper, is like a canine Barbie doll. He has an outfit for every occasion: two fleece jackets, a lightweight winter coat, a heavyweight winter coat, a raincoat and even pajamas. I sometimes get ribbed by friends about Jasper’s extensive wardrobe, but greyhounds, like other short-coated dogs, are extremely sensitive to the cold.

Unfortunately, not all animals are as well-outfitted to withstand winter weather as Jasper is. *PETA’s Community Animal Project fieldworkers encounter animals all winter long who are suffering outdoors. Dogs are often tied up outside 24 hours a day, sometimes with nothing more than a card table, a plastic carrier or an overturned trash can for shelter. Some dogs have no shelter whatsoever.

One example of the latter is Noel, a starving pit bull mix who was found by PETA fieldworkers tethered to the trunk of a holly bush and shivering violently in the December cold. Noel had no shelter, no water and no food unless you count the few pieces of kibble scattered on the ground, out of her reach. PETA rushed her to a vet, who estimated that she was roughly half her healthy weight.

Sadly, Noel’s case is not unique. In December, two dogs froze to death after being dumped outside the Terre Haute, Ind., animal shelter.

A stray cat named Trooper was found frozen to a driveway in Newfoundland after apparently being hit by a car and breaking his hip. His body temperature was so low that it didn’t register on a thermometer. His tail and one leg had to be amputated because of frostbite.

A kitten named Rocky Balboa by Sioux City, Iowa, shelter staff because of his fighting spirit was found near death, frozen to a trash can.

Two dead pit bulls were found frozen to the ground – one in Memphis, Tenn., and the other in Philadelphia – after neighbors called police. “It makes me want to cry. I hate animal cruelty. … (I)t hurts my heart,” said one neighbor.

Dogs may have fur coats, but they are not immune to the cold any more than a person wearing a coat would be if he or she were to sit outside on the frozen ground all day. Many dogs, including short-haired breeds such as pointers and pit bulls, young or elderly dogs and small dogs such as Chihuahuas, dachshunds and beagles, are even less able to handle the cold than humans are.

Neglected and abandoned animals need our help to survive. Stray and feral cats should be captured and taken indoors. If a dog is being denied adequate food, water or shelter, please alert authorities right away.

In Noel’s case, a call from a neighbor saved her life, and her abusive owner was charged and banned from ever owning animals again. Today, Noel is thriving in her new home. She may not have quite as many coats as Jasper has, but she never has to worry about being left out in the cold again.”

Alisa Mullins / People for the Ethical Treatment of Animals

*Life With Dogs has no affiliation with PETA, nor are we trying to promote them in this article.  The latter half of the article, written by Alisa Mullins, was published in a number of newspapers, and was reshared here for the explicit purpose of highlighting one person’s experiences and views on animals left in the cold.

12 thoughts on “Help Pets Left Outside in the Cold”