We are a couple living in Brooklyn, NY and we need your help to find our stolen dog.

Winston is back!!!! Thank you so much for your help!
.
We got a call around 1:30pm yesterday from a woman that said she had found Winston about 6 weeks ago on Franklin. Her sister had seen our flyer just this weekend in Crown Heights and so she gave us a call. The story goes that she was driving on Franklin Ave and the officer came up to them and offered them a “free dog” saying that he did not want to do the paperwork! What an ass…never trust NYPD. 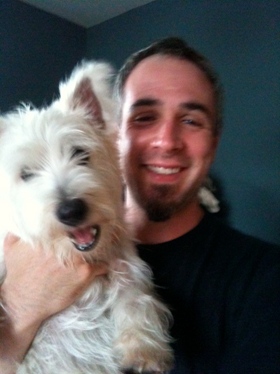 She and her family had him all this time and took very nice care of him. They have a small son that he was playing with in the photos that she sent us. So they drove from Brownsville with the whole family and brought us our boy back! They were sad to see him go but were happy with the reward 🙂

On the night of 8/5/11, we had our two dogs with us at the Celebrate Brooklyn concert in Prospect Park. Following the concert, we took them to Long Meadow for off leash hours. Our younger dog, Winston, a 1 year old West Highland Terrier got spooked by a flashing dog collar light and took off running South in Long Meadow.

We searched until 2am for him before heading home to start making posters and activating HomeAgain (the dog microchipping service). Saturday morning, we contacted many, many local vets and the local shelters. On reaching Sean Casey\’s Animal Rescue, we were informed that a girl had found our dog and called Sean\’s shelter to report. She even took pictures. Along the way she ran into the police and gave him to them.

The police promised to take Winston to the shelter the next day. We contacted the girl who was super helpful and sent her pics to us, showing that indeed she had found Winston trying to cross Eastern Parkway to make his way home. She remembered the officer’s name and we contacted him on Saturday. Apparently during the night three black women pulled up in a black 4 door sedan with Virginia plates. They convinced the officer that he was their dog and he gave him to them. He was last seen at the corner of Eastern Parkway and Franklin Ave heading south on Franklin Ave. 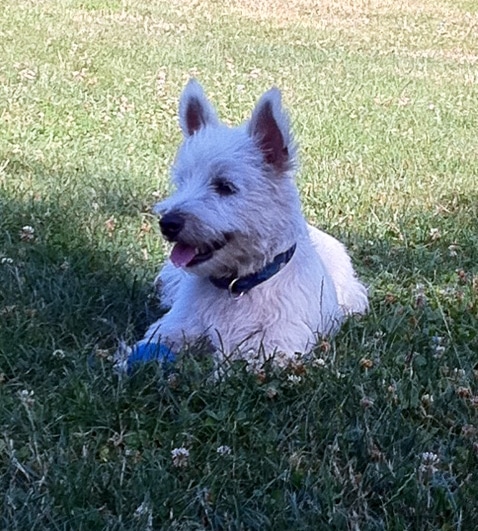 There is an NYPD video camera at the nearby corner of Lincoln Place and Franklin Ave but the cameras are not recording! The officer did not get identification, did not get their license plate number, and did not make a report. Winston is about 19lbs, white only, pointy ears, VERY friendly.Winston has a microchip in his back, from HomeAgain, Microchip985121004807417. We need all the help that we can get.

Neverending thanks for your help, Michael Reinhardt and Kumiko Masaoka  [email protected]