When Roland Hendel’s property was about to burn in the recent Tubbs fire in Sonoma County, he was forced to make a last-second decision as the flames closed in.

Hendel had children, two dogs and eight bottle-fed rescue goats. He was able to flee with the kids and one dog, Tessa, but the goats, along with family’s beloved Odin, a Great Pyrenees who watched over the herd, were left behind. 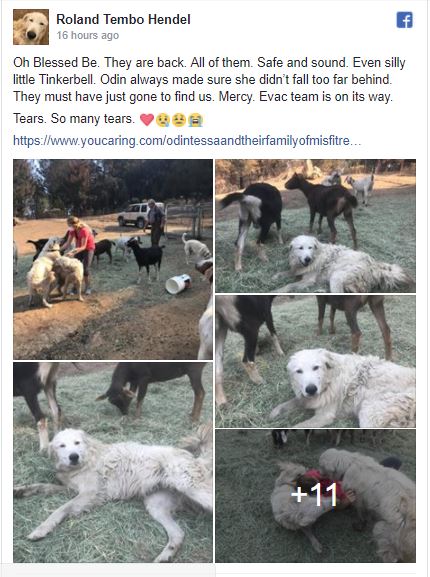 “Hours later when we had found relative safety we cried for Odin and our goats,” Hendel wrote on the family’s YouCaring crowdfunding page. “I was sure I had sentenced them to a horrific and agonizing death.”

Days later, once allowed back into the area, Hendel and his family were astounded to find — amid the total devastation of the home — all eight of their rescue goats and Odin had made it through the ordeal.

Odin was exhaused, stained gray from the smoke, but appeared to be in great shape. The reunion with his family, in particular sister, Tessa, seemed to buoy him.

“He appears to be getting stronger, and his sister’s presence will surely help to lift his spirits and take some of the burden off his giant shoulders,” Hendel said.