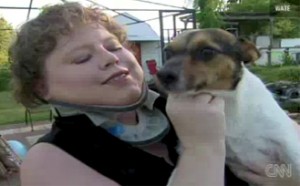 KINGSTON, TN –   Rebecca Northern credits her Jack Russell terrier with saving her life. Northern was swimming in the back yard pool at her parents home when miscalculation led to a dive that saw the Tenessee woman hit the bottom of the pool, instantly breaking her neck.

There was no one else at home except Selena. The dog, she says, jumped in after her. “I could not feel anything because I was numb. My dog got her nose under my shoulder. I could not feel her but I knew she was there. She floated me from the deep end to the shallow end. When we got to the shallow end, she gnarled and dragged me out, like dragging an animal or something,” said Northern.

Rebecca says she eventually managed to get out of the pool with Selena’s help. She says the dog barked constantly keeping her conscious. Her mother got home later and took her to a local hospital. She had to be flown to UT Medical Center to be treated for a broken neck. Selena is expected to be “spoiled beyond recognition” according to the Northern family, who could not be more grateful for the little hero dog given to their daughter as a gift many years ago.