A man was walking along a beach in North Wales, doing some fishing and taking photographs while his dog ambled along.  The dog, Leia, began barking excitedly, alerting her human to an important find.  There was a baby harbour porpoise stranded on the rocky shore, and the man diligently got it back into deeper water to find its family.

“Whilst attempting bass fishing on a beach near Criccieth (close to the mouth of the River Dwyfor) I was taking photos of the fantastic scenery when I heard my dog barking at me from further down the beach…. clearly she had found something,” said the man who uploaded the video to YouTube.

The crashing waves seemed to be causing confusion to the wee porpoise, who kept trying to swim with the waves towards land.  Though it took a few tries, the benevolent man carefully guided it back into the water.

“Stayed at the site for a while after to make sure he didn’t come back. Spoke to the coastguard once I had signal and they reported it to the science team. Think the little guy was lucky as there was nobody around for miles!

“And, if it wasn’t for my dog barking at me I would have missed him, too!”

Bravo to both of these heroes. 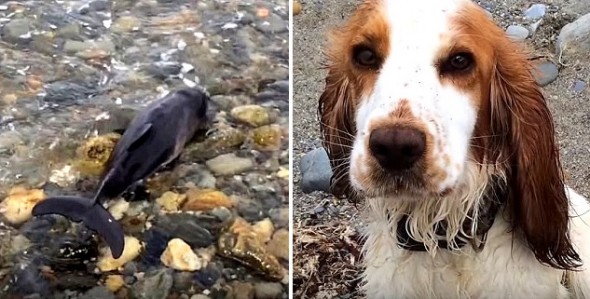