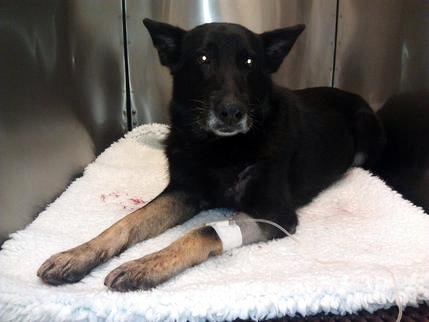 When K-9 Deputy Kenzo found himself between his handlers and and armed murderer, he stood his ground. Officers say that single act of bravery saved their lives – and nearly cost him his.

The Palm Beach County Sheriff’s Department was in pursuit of a man believed to have already killed his girlfriend when the incident occurred Monday evening. A perimeter was established, and as deputies neared the suspect, Kenzo rushed him, putting himself in harm’s way and taking two bullets intended for his handlers.

Sheriff Ric Bradshaw said there was no time to react: in seconds, the dog took two shots to the body. “He gave the deputies enough time to do what they needed to do,” Bradshaw said.

Sheriff’s Lt. Richard Burdick was approaching the suspect with Kenzo, and sustained a gunshot wound to the thigh. Bradshaw says if it weren’t for Kenzo he would have likely been killed.

“If he hadn’t distracted the guy, maybe more than one of them would’ve been shot, and maybe not just in the leg,” Bradshaw said Tuesday. “But that’s what he’s trained to do – apprehend people.”

Kenzo, a black German shepherd, is an eight year veteran of the force. In an emergency surgery one bullet was removed from his body: the other shot passed clean through. Kenzo was discharged from the Palm Beach Gardens hospital this afternoon and went home with his handler, but not before the department celebrated his release with a parade of patrol cars flashing their lights and sounding their sirens in his honor.

The suspect, Armando Gonzalez Filipe, was killed. An investigation of the incident is underway.

Lt. Richard Burdick’s wife issued the following statement in praise of the dog who saved her husband.

“To the Employees of the Palm Beach County Sheriff’s Office,

I would like to take this opportunity to say thank you to those that have reached out to my husband and I following the events of yesterday evening. Your thoughtfulness and gracious offers of help are greatly appreciated. My husband is doing well, he is resting at home. He is sore and tired but in good spirits and will be off the crutches in a day or so. Your calls, texts and emails have meant a lot to both of us.”

“It is during times like these that we see the true sense of family on display at the Sheriff’s Office. It has been comforting to know that we can call on so many friends should we need to. I’d like to personally thank K-9 Kenzo for sacrificing himself so that my husband could come home to me. We wish him a speedy recovery. There are a lot of emotions that run through you when something like this happens and it can be hard to put into words but the greatest emotion is gratitude for you, his friends and co-workers, who daily put your lives on the line to keep the citizens of Palm Beach County safe and for that I say thank you!”