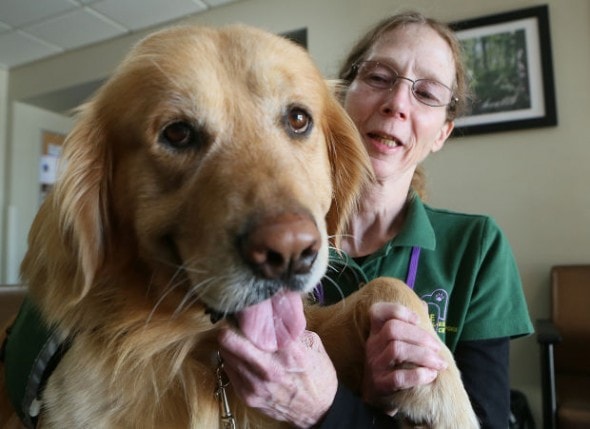 In Andy’s home town of Chesterton, Indiana, he’s not only a certified therapy dog, but he’s also considered a local hero!  After seeing an elderly person fall into a snowbank, Andy leapt into action.  Literally.  He jumped the fence in his yard and went over to where the fallen person was and alerted everyone to what had happened.

If he hadn’t, this story may have taken a grimmer turn.  Andy’s quick thinking saved this person from freezing to death in the snow.  Otherwise, the way that they had fallen would have made them all but invisible to any passerby.

A few weeks ago, during a bitterly cold evening in Chesterton, Andy and his brother Ike had been let out into the backyard.  At the same time, an elderly neighbor was getting out of their vehicle next door, and slipped and fell into a snowbank, almost completely disappearing from sight.

Andy saw what had happened, and didn’t miss a beat.  He hopped over the fence containing him in the yard, and ran towards the helpless woman in the snow.  Then, Andy made a ton of noise.  The excited barking drew out Vicki VanDenburgh, Andy’s human.  Vicki came over to him immediately, and the fallen woman was rescued from the snow.

“No one would’ve known she was lying there if it wasn’t for Andy,” said Vicki. “I don’t know how he knew. He just did.”

The woman was suffering with knee problems, and was in need of knee replacement surgery.  Between the bitter cold, and the fact that the woman wouldn’t have been readily visible to anyone, this was a real life or death situation.  Luckily, Andy was there to save her.

“Andy stayed with us the whole time,” said Vicki. “It was really amazing. I’m sure he saved her life.”

Both Andy, and his brother Ike have been trained and certified as therapy dogs.  They also participate in the HOPE Animal Assisted Crisis Responses Team.  This is a group of specially trained dogs and their humans, providing comfort to people in need and in crises situations.  They are very well known throughout the area in which they live, and always seem ready and willing to help at a moments notice.

“The dogs love it and the people at Porter-Starke really love them.  It’s amazing to see people react to them that don’t respond to anything else,” said Vicki.