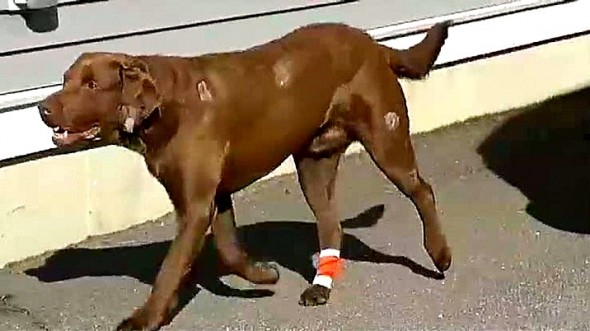 A Chesapeake Bay retriever named Mack is recovering after he spent 10 minutes fending off a huge, rogue coyote that attacked his owner.

A woman (who declined to be identified) was outside on her Greenland, New Hampshire farm Monday morning when a large coyote approached and attacked her.  His wife heard her screaming and jumped out of the shower and grabbed his gun.  He got in his truck and drove to the part of the 100-acre property to where he could hear the commotion.  Near a small pond, he saw the coyote biting Mack.

Most coyotes are timid around humans, but the husband said this one was relentless.

“This was more indicative of a diseased animal,” Lt. Eastman said. “They don’t hang around, they don’t like to be around human beings so something is very wrong with this coyote.”

Or perhaps he was just very hungry.

The man fired several shots and scared the coyote away.  The terrifying ten minute attack left his wife with a bite on her hand, and Mack with wounds all over his body.

“My dog is the sweetest thing in the world but he would not give up a fight for anything, so it’s very scary,” said next door neighbor Elizabeth Tallman, who knows coyotes are not uncommon in the area.

“They come in packs, you can hear them yipping, if I go to open the door to go out, they all run off,” she said.

Wildlife officials say smaller Western Coyotes are moving east into Canada, breeding with wolves, and then roaming around New Hampshire.

However, their size and breeding doesn’t make them more aggressive, so the attack comes as quite a surprise.

“It must have been terrifying for her, but I am glad she and the dog are going to make it,” Tallman said.

The couple says this won’t stop them from enjoying their property, but the licensed owners will make sure they always keep a gun with them when they are outdoors.  Aside from a number of puncture wounds, Mack is doing quite well.