A golden retriever named Amber is being called a hero for saving her owner’s life – twice.  When a snowmobile crash left Otis Orth with a neck injury and dislocated limbs, Amber kept him warm through the freezing Alaskan night, and found rescuers for him the next day.

The Trapper Creek man would have lost his life had it not been for his angel of a dog.  Orth crashed his snowmobile on Sunday afternoon when he hit a hollow snow drift, and was thrown nearly 50 feet from the machine.

He was eventually able to roll onto his back.  He heard other snowmobiles, but couldn’t be seen because he had sunken into the snow.  He could hardly speak, and wasn’t able to call out.  By Sunday evening, anyone using the trails over the weekend had gone.

Orth moved his legs and toes around as much as he could to keep frostbite from setting in.  But the temperature was only nine degrees that night. Two-year-old Amber lay next to him, and protected him by keeping her head and paws over his body.

“My dog kinda just lay across my belly on my right side.  I just kept my mind occupied watching the stars and stuff,” he said. 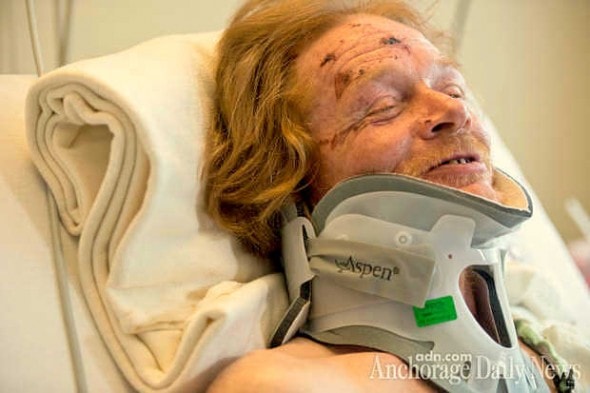 On Monday morning, Orth heard snowmobiles again.  He tried sending Amber out to catch their attention, but she wouldn’t move more than 40 yards from him.  In the afternoon he knew he’d run out of opportunities.  When he heard the engines again, he had to get Amber to go.

“I heard a couple snowmachines coming,” he said.  “They weren’t very far away, so I psyched Amber up: ‘Go get ‘em, girl!  Go see who’s out there!’”

Amber listened, and darted out onto the trail, coming across brothers Tom and Maynard Taylor.  She tried to follow them a few times, but Tom didn’t want her following, in case she lived in one of the cabins nearby.  But Maynard realized how agitated she was, and insisted that they check out the area. Amber sat and waited as they dismounted and looked around.

“Maybe half-way over there I started to see a black object on the snow. There’s no trees over there, this is open swamp,” one of the brothers said. “It turns out it was [Orth’s] knee. He had it pulled up toward his body…When I got closer, we saw it was a person.”

They learned that the man was unable to move.  Maynard drove to the trailhead and called 911.  The Alaska State Troopers and Trapper Creek EMS rushed out, and Orth’s neighbors were alerted.  They brought things to warm him up – everything from heating pads to hair dryers.  Everyone stayed with him until a LifeMed helicopter arrived around 4 pm.

Orth says he wouldn’t have made it another night.  He was thankful to everyone who took part in his rescue.  But Tom knows who’s really responsible for it all: