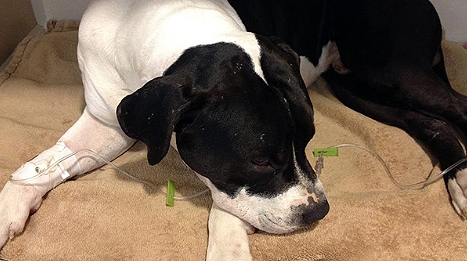 A loyal family pet is in serious but stable condition after he was shot while protecting his family from armed intruders.

Spokane Major Crimes Detectives are investigating a home invasion robbery where the victim’s dog was shot. On 6-26-12 at 9:41pm Spokane Police responded to a shots fired call in the area of 400 W. Park Place with information that a dog had been shot.

While the suspects were fleeing from the residence, the victim’s dog chased after the suspects and was shot multiple times. The suspects fled the scene in a white, older van with bi-fold doors on the side.

Spokane Police are asking anyone with information regarding the incident to call Crime Check at 456-2233.