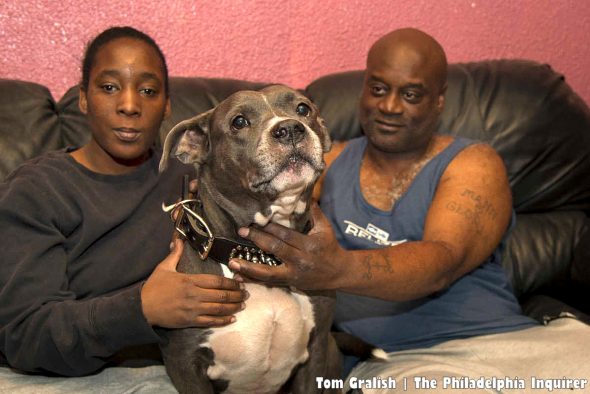 A rescue pit bull named Blue repaid the kindness of being saved from a shelter when he saved his family from a masked gunman who invaded their home.  Blue was shot in the shoulder, but a police officer rushed him to a vet, and he’s now recovering.

Blue was adopted two years ago to help keep his family safe in their home.  Leroy Buchanan and Nina Taylor live in West Philadelphia, and their neighborhood has seen 71 property crimes and 43 violent crimes in just the past month.

“All you got to be doing is letting one of your family members in or something and these [guys] come running down the street with guns. It’s crazy,” Taylor told The Philadelphia Inquirer. “So I said instead of doing the wrong thing that’s going to get me incarcerated, I’m going to go ahead and do it the legal way and get some protection.”

So they got Blue and fitted him with an intimidating-looking collar to show potential criminals that their house was being guarded.  And on February 13th, at least one man learned to think twice before messing with Blue’s family.

Taylor had just returned from the store and Buchanan was cooking breakfast when an acquaintance of theirs, D.I., came knocking.  Taylor answered and says that D.I. pushed his leg through, claiming that it hurt.  Seconds later, a man wearing a black ski mask sailed over the railing for the porch next door and threatened Taylor with a gun, demanding that she “Give it… up.”

Buchanan commanded Blue to “get him,” which he did.  Blue chased the man into the street and clamped down on his leg.  The assailant shot the dog in the left shoulder, but Blue refused to release him.  Buchanan ordered him to let go and he did, and then staggered into the house, whimpering.

“I instantly broke down,” Taylor recalled.

D.I. and the raider fled.  When police arrived, Taylor stayed to give her statement while Buchanan placed Blue into the back of a cruiser and accompanied him to the University of Pennsylvania School of Veterinary Medicine.

Lead surgeon Brian Brophy said this wasn’t his first gunshot victim, and he and his team quickly got to work to remove the bullet.  It had traveled from his shoulder through his lung and out of his sternum.  It was a through-and-through shot, but the pierced lobe of his lung had to be removed.  Blue was well enough to return home after four days.

“Pit bulls have an inherent toughness and will to live about them,” Brophy said.

Taylor and Buchanan told police they believe D.I. set them up, but neither he nor the masked marauder have been arrested.  The vet visit cost around $10,000, some of which was covered by Ryan’s Hospital Charitable Pet Care Fund.  But it was well worth it to bring their hero home.

When Taylor was asked if she considers Blue her hero, she replied:  “Damn right!  That’s  my son… If he wasn’t here, we probably would have been all shot up.”