Would you run toward a burning building to save your best friend?

That’s just what 14-year-old Phoenix resident Mike Assi did when he saw smoke billowing from his family’s home as he boarded the school bus. Knowing the family dog, Zack, was trapped inside, the teen bolted on instinct.

The cherished pit bull is more than just a dog to Mike.

Wisely, rather than running into the burning house, Mike simply opened the front door so he could let Zack out.

“I start yelling my dog’s name because I knew he was in there. He wouldn’t come out the front door. There was a lot of pitch-black smoke.”

When he couldn’t see into the house, Mike says he ran to the back door.

Mike’s mom was at work but says she wasn’t surprised by her son’s heroism.

“He grew up with the dog… he spent a lot of time with his sister in her house, that’s why he love him to death… he not going to leave him,” Hana Bress told reporters. 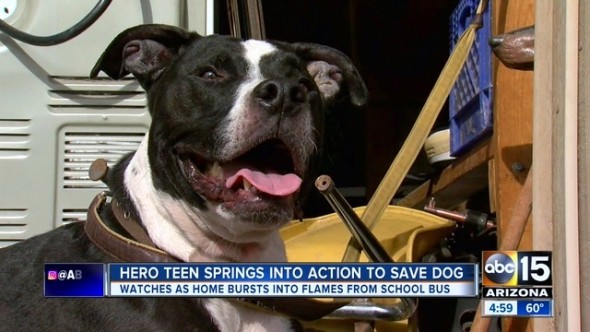 Both Mike and Zack were pronounced healthy by emergency crews at the scene.

A GoFundMe page has been setup to help the family, who lost a great deal in the blaze. Over $3,000 had been raised at press time.