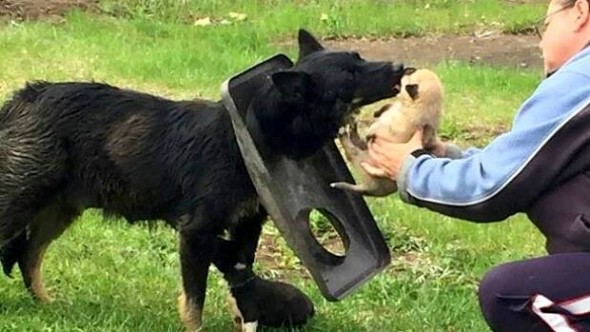 Two young Canadian boys are being called heroes after saving a stray mother dog that somehow got a trash can lid stuck on her, that several adults had tried to free her from before but couldn’t get close enough to her.  It was stuck on the poor dog in such a way, that it made nursing the puppies she just recently gave birth to impossible.  Thanks to the two boys, she was freed, and the mother dog and her new family were rescued and taken to a shelter.

The boys are from Cross Point, Manitoba.  Dominick Monias and Leighton Ladyka are neighbors and friends, and it was them that ended up finally freeing the stuck dog.  Adults and rescue volunteers tried approaching the dog they dubbed “Her,” but she simply wouldn’t have it.  No matter whom approached her, she made it all but impossible for anyone to help her. 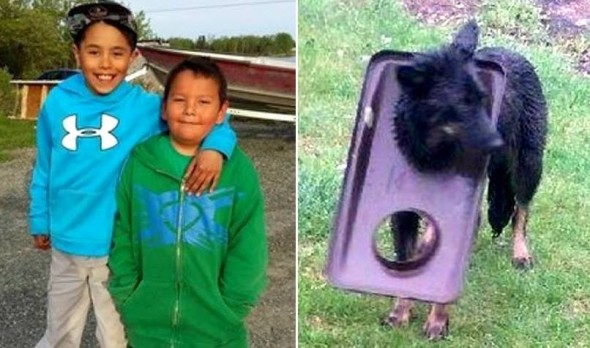 Well, she made it all but impossible, except for the two boys.  They were able to go right up to where she was, comfort her, and managed to get her to trust them enough to get the lid off of her.  Dominick positioned himself so that he could gently grasp her snout just in case she decided to snap, and Leighton pulled the lid off.

The dog is now with the Norway House Animal Rescue, who had been trying to rescue her and her pups all along.  The dog has actually been evading capture for over a year now.  Last year, right around this time, there were reports of the dog having many litters of pups in someone’s backyard.  No matter what was done, she evaded capture every time.

Debra Vanderkerkhove, the director of the rescue group said, “Two young boys did what no one else could do.  They got the lid off the Mom all by themselves!  They managed to trap her in the shed then they closed the door.  Trudy’s son held her snoot, while the other boy pulled the lid off.  True Community heroes.  Wow, I am speechless.  They deserve an award.  These boys are pretty happy that they got the lid off the dog just a while ago.”