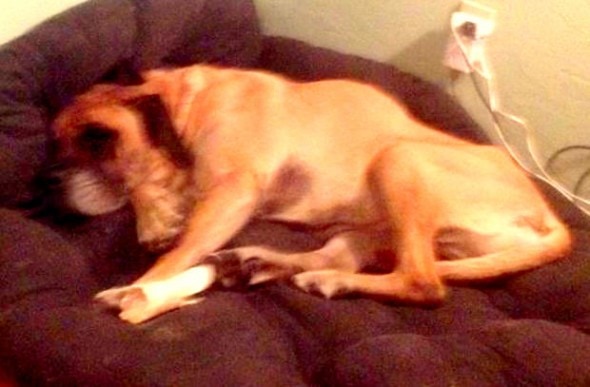 Madison, a female bull mastiff was reunited Sunday with her family after being apart for 22 days.  This is all thanks to some good Samaritans and people volunteering with the Linn County, Oregon Search and Rescue.

The whole thing started when Linn County Sheriff Bruce Riley said his office received a report of a possible lost hiker in the Cascadia area.

What deputies arrived on scene to, was Brian Floro and his girlfriend Julie Foubert with her son Scott and his girlfriend Rebecca Heubreger.  They had been hiking along the South Santiam River, and is an area the four are well acquainted with.  While climbing over a rock to get a view of the area, Floro noticed Maddison, lying on a rock slab, and didn’t look to be in the best of conditions.

“At first we though he was joking,” Foubert said.  “We hadn’t seen anyone all day, let alone a dog out there.”

The dog was surrounded by steep rocks one three sides, and water on the other.  Almost an impossible position to escape from, and in her weakened condition, it was unlikely she’d make it up and out on her own.

“She was trapped unless she swam out.  It would have been very hard for her.  She looked pretty rough, and she was scared,” Foubert said.

It was decided that Floro would stay with Maddison, while the rest of them went for help.  No one was carrying a cellphone, but once reaching the road, they found a phone, and were allowed to use it.

The hikers then went to House Rock Campground to wait for the search and rescue team to arrive.  While there, they told the story of what was going on to campers, and many offered assistance in both donating food, flashlights and warm blankets.  Anything to assist.

“One couple was walking their dog,” said Foubert, “and the man gave us the flannel shirt off of his back.”

Search and rescue finally got to the scene, and Deputy Lisa Chase having been in the area not long ago, remembered seeing a poster of Maddison saying she had been missing.  She had been lost near the Sevenmile Horse Camp on the 4th of July.

Because of the terrain, and the fact that night was quickly approaching, the rescue team decided to hunker down and wait for morning to move her.  Maddison rested comfortably in a sleeping bag and had a nice meal, and around 6:30 am the next day, she was brought to safety, and reunited with her family.

Lori Davis and Patrick Milligan could not be happier to have their Maddison back.