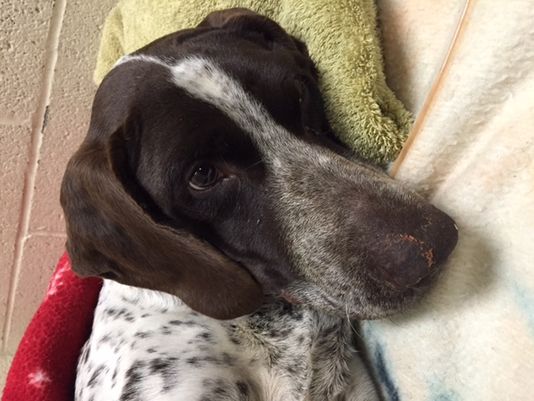 A good Samaritan from Fort Mill, South Carolina came across a dog, hit by a car and left for dead in the middle of the road.  If it wasn’t for this kind person passing by, the dog may not have made it this far at all.

The person brought the dog to a vet for emergency treatment in Charlotte.  Upon arriving, it was discovered that the dog had extensive damage done to him in the accident, and if not treated quickly quite possibly was not going to last much longer.

“Once he was hit by a car and he has really no use of his back legs right now or use of one leg. He crawled to the middle of the road to get himself out of the way,” said Lauren Barker of Southeast German Shorthaired Pointer Rescue.

The person that picked the dog up off the side of the road decided to get in touch with Barker.  The medical bills they discussed were over $9,000.  Surgery to repair a broken front leg, and also another to fix his dislocated hind legs.

Barker said, “I know people probably think that’s a lot of money for a dog, but then I think about it and if it were my dog, I would spend what I could if he was healthy and willing to live.”

The dog has been dubbed Ozzy, and it’s clear that he is a fighter.  In order for the medical staff to begin the operations, a deposit was required.  To help raise this money, a GoFundMe.com page was started, and Ozzy was turned over to the rescue group.

Many people around the United States have already donated, and much more will be needed as Ozzy’s story is spread.  If you can help, either click on the link pertaining to the rescue group or the GoFundMe.com page.  Or, you can simply click here for more.

31 thoughts on “Hit and Run Dog Rescued by Good Samaritan”