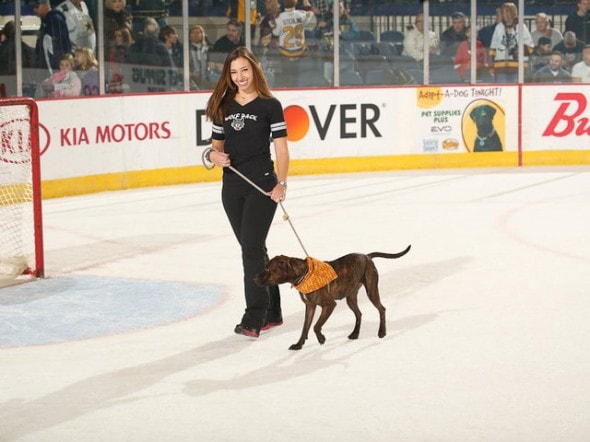 Over the past 12 years the Chicago Wolves hockey organization has helped 1,035 dogs find forever homes.

One Saturday a month 13 to 28 dogs from Chicago Animal Care and Control come to the Allstate Arena for the Chicago Wolves’ Adopt-A-Dog program.  Fans attending the game can adopt one of the dogs in need of a home after a background check and paying a $65 adoption fee.  The next Adopt-A-Dog night will be held this Saturday, January 5th.

Wolves owner Don Levin has adopted seven dogs in the last eight years alone. “We try to get as many dogs adopted as we can,” said Levin. Many of the Wolves players and employees have also adopted dogs through the program. Levin also purchased and donated the Animobile to Chicago Animal Care and Control. The Animobile is a free and convenient mobile adoption unit as well as a modern clinic. The Animobile travels around the city of Chicago to help decrease the number of strays.

Wolves senior vice president of operations Courtney Mahoney coordinates the program with Chicago Animal Care and Control‘s Jenny Jurcak. “This is a phenomenal program,” said Jurcak. “These are dogs we’ve fostered or taken off the streets, and we’ve gotten them forever homes.” Adoptable dogs through the program are also featured on the Chicago Wolves’ website.