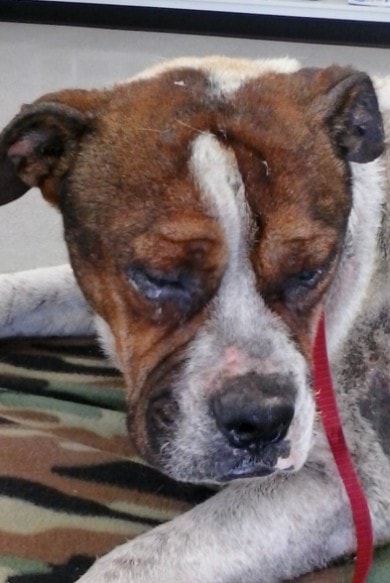 Firefighters responded to a three-alarm blaze that was fast consuming a warehouse in a derelict industrial area in Houston, Texas.  Bystanders tried to tell them that this was an area where people were known to abandon unwanted pets.  But crews were focused on snuffing the flames.  While they were busy, a dog named Rocky bolted from the building with burns covering his body.

No one seemed to notice.  The following day, volunteers gathered to search the ruins for animals.  What they found was a surprise to everyone.  A homeless man was asking for help – not for himself, but for Rocky, the boxer who had survived the inferno.  He had found the frightened and injured dog beneath a car, and took him in, sharing his food and blanket with him.

“A person down on his own luck, who just lost his apartment, gives up a blanket and shares what food he has with Rocky – that engages anyone with a soul,” said Jae Malik, one of the volunteers.  “Then you see Rocky, that clinches it… If a homeless guy can give him a blanket, who are we to walk away?”

The group took Rocky to a vet, sure that they would mercifully put him to sleep.  Burns covered 25 percent of his body, including his ears.  But Rocky was a fighter, and the vets were going to help him.

Since he was discovered on Sunday, Rocky’s had three surgeries to remove dead tissue.  He’s had hydrotherapy after the procedures – an ice bath twice a day.  The cost of the surgeries, therapies and medications could cost upward of $10,000. 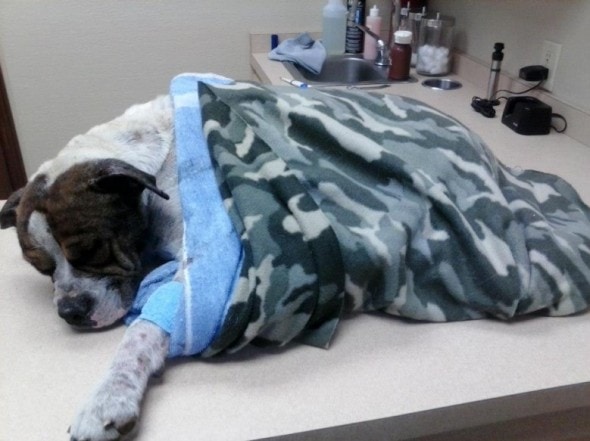 “This dog has not growled, has not snapped, has shown zero aggression with all of us, while undergoing such a tribulation.  That will to live that he shows, while he remains loving, you have to help,” Jae pleaded.

The group of volunteers hopes that spreading Rocky’s story will encourage people not only to help fund his treatment, but to remember this message:

“If you sit and wait, nothing will continue to happen.  Rocky is proof that it only takes one person caring to be a catalyst for positive change.”

If you are interested in making a donation for Rocky’s care or to receive updates, please visit: